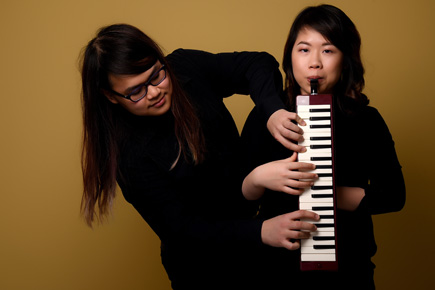 ROSL success for Bertram and Lynette

The duo, who formed in 2013 during their first year as undergraduates at the College and have been playing together ever since, won the £10,000 prize with performances of Sciarrino’s Sonata per due pianoforti and Ravel’s Daphnis et Chloé.

Both Bertram and Lynette have a special interest in performing contemporary music, working with composers Michael Finnissy and David Lang during their RCM residencies. Lynette was joint winner of the RCM Contemporary Music Competition in 2016, whilst Bertram has won several composition competitions and had a piece performed at the BBC Proms in 2015 by percussionist Dame Evelyn Glennie.

Other RCM musicians who enjoyed success at the ROSL Annual Music Competition 2017 include bassoonist Justin Sun who won the Sussex Prize for Woodwind, RCM alumnus Gamal Khamis who was awarded the Accompanist’s Prize (jointly with Somi Kim) and mezzo soprano Ashlyn Tymms who was named Outstanding Australian Musician.

ROSL ARTS is the arts division of the Royal Over-Seas League, and for over 50 years has developed a diverse portfolio of arts activities in Music, Visual Arts and Literature, devoted to the career development of talented young professional artists and musicians from the UK and the Commonwealth

Bertram and Lynette will be performing in the Grand Final of the ROSL Annual Music Competition at Cadogan Hall on Wednesday 7 June. More information can be found on the Cadogan Hall website.