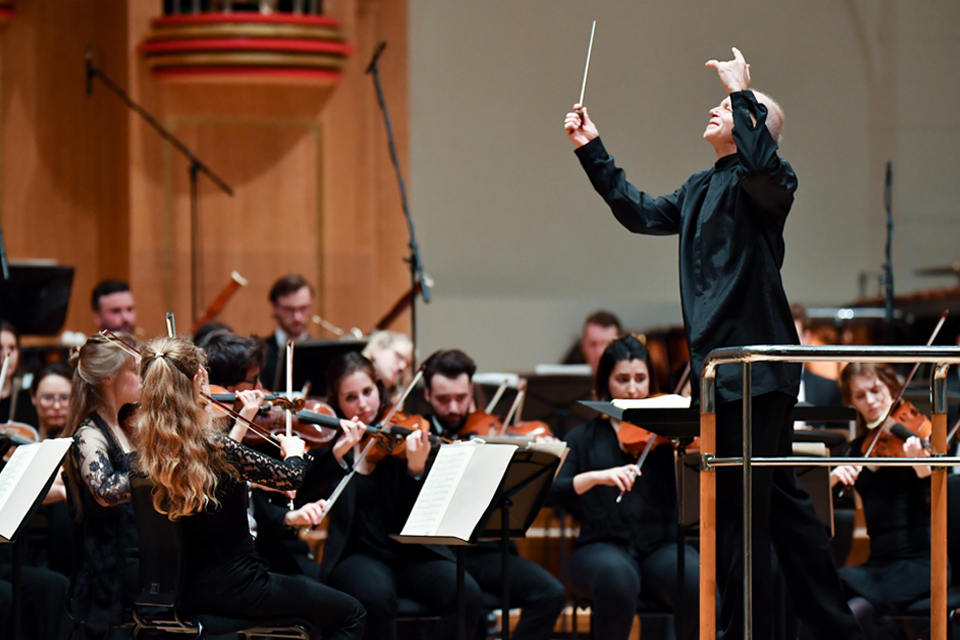 This Friday, BBC Radio 3 will broadcast the RCM Symphony Orchestra’s performance of Simon Holt’s An icicle of moon and works by Mozart and Dvořák, conducted by Thomas Zehetmair. The performance was recorded in the Royal College of Music’s Amaryllis Fleming Concert Hall in front of a live audience on Friday 22 March 2019 and will be broadcast in the primetime slot of 7.30pm on Friday 14 June 2019.

Thomas Zehetmair is currently Principal Conductor of the Musikkollegium Winterthur and will this year take up the position of chief conductor at the Stuttgarter Kammerorchester. Enjoying widespread international acclaim as a conductor, violinist and chamber musician, Thomas has visited the RCM on many occasions to work closely with RCM musicians and coach them through a wide range of repertoire.

Taking its name from a poem by Garcia Lorca, An icicle of moon is an evocative piece scored for small orchestra, written by RCM Composition professor Simon Holt. Simon has had pieces commissioned by orchestras around the world including the London Sinfonietta, Berliner Philharmoniker, City of Birmingham Symphony Orchestra and BBC National Orchestra of Wales, and has been commissioned to write three major orchestral pieces for the BBC Proms to date.

As part of their musical training, RCM students have the opportunity to learn not only from expert professors, but also visiting artists who are leaders in their field. Students benefit from masterclasses from the likes of Sir Thomas Allen, Nicola Benedetti and Maxim Vengerov, the RCM’s Polonsky Visiting Professor of Violin, and orchestral coaching from internationally-renowned conductors such as Bernard Haitink, Vladamir Ashkenazy, Holly Mathieson and Rafael Payare.

Along with An icicle of moon, BBC Radio 3 will broadcast the RCM Symphony Orchestra’s performances of Mozart’s Sinfonia Concertante and Dvořák’s Symphony no 8. Listen live on 90-93FM or shortly after broadcast on the BBC Radio 3 website.