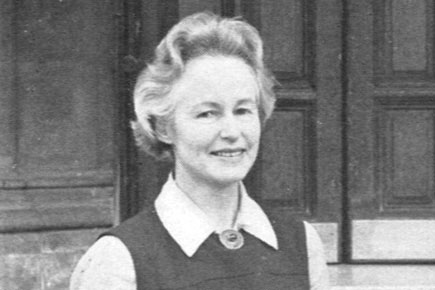 Barbara Boissard, RCM alumna and former Director of the RCM Junior Department from 1975-1983, has died.

Barbara entered Senior College as a scholar at the age of 16 and studied piano with Arthur Benjamin, violin and viola with Loris Blofeld and counterpoint with Herbert Howells, finally taking the graduate course under Angela Bull. She was also awarded a Leverhulme Exhibition.

She gave her first piano recitals in 1939–1942 and toured as a soloist and accompanist, playing with artists such as Kathleen Ferrier.

While her three children were young, Barbara forsook the concert platform to look after them. During this time she built up a large private teaching practice at home as well as teaching at the RCM Junior Department. For many years she taught at Colet Court and St Paul’s School and examined for ABRSM before being invited by Michael Gough Matthews, then Director of the RCM Junior Department, to assume the role as Deputy Director in 1972. She later became Director in 1975.

Colleagues at the time spoke of her valuable feminine insight, genuine appreciation and parent's understanding of the students. This, accompanied by her professional experience and standing, enabled the Junior Department to flourish.

Barbara was a highly respected piano teacher and is remembered fondly by her students. She maintained contact with her former students and the RCM long into her retirement, attending concerts when she could. Many will remember her 90th birthday party held in the Parry Rooms five years ago.

She was awarded the FRCM from the late Queen Mother, former President of the RCM, in 1975. She was also made an Honorary Fellow of UCL in 2001.

A private family funeral will be held on Monday 27 January in Tunbridge Wells. The family have requested that donations be made to the RCM Junior Department Bursary Fund instead of sending flowers.