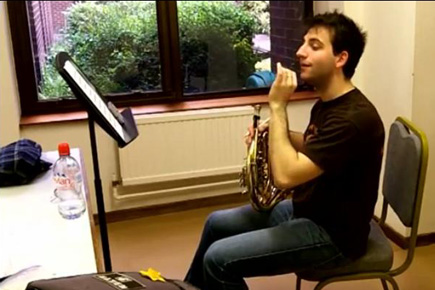 The RCM has collaborated with the University of Cambridge’s Centre for Musical Performance as Creative Practice (CMPCP) for an investigation into how musicians find creative inspiration.

Led by University of Cambridge Professor John Rink, with CMPCP associates including RCM Professor of Performance Science Aaron Williamon, the “Creative Learning” project has shown that musicians may be at their most inspired when they step away from their instruments and think about music in different ways. It also identified four main ingredients needed for an artist to achieve creative expression in practice and performance contexts alike: freedom, flexibility, a sense of being “in the moment”, and a commitment to “giving” the music to an audience.

The researchers carried out some of their fieldwork at the RCM, using a combination of questionnaires, interviews, focus-group discussions, and observations of one-to-one lessons and practice sessions. RCM horn player Pablo B. Ortiz de Urbina was one of the students selected to take part in the project, which he said was “a great way for me to understand the processes that I undertook to familiarise myself with a piece, which I am sure have helped me to communicate better when I am playing and conducting.”

The project’s findings are reported in a new film, “Passionate about Performance” - which features footage of Pablo practising - and were widely reported in the press, including the Guardian, The Times and the BBC news. Pablo took part in an interview on World Service Newshour, which is available to listen to as a podcast (from 18:30).

Further information about the project can be found on the University of Cambridge website.