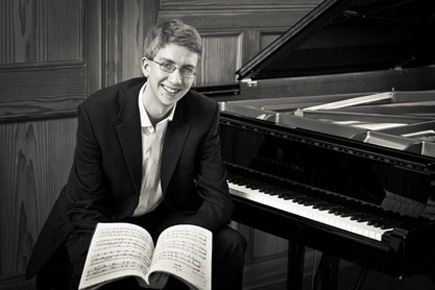 RCM alumnus Ian Tindale has been announced as the winner of the Accompanist’s Prize in the prestigious Royal Over-Seas League Music Competition.

Ian will perform in the competition Final at the Queen Elizabeth Hall on 1 June with Soraya Mafi, a fellow RCM graduate who won this year’s Singers Section. RCM harpist Juliana Myslov will also be competing for the Gold Medal and First Prize following her recent triumph in the competition’s String Section.

The ROSL Annual Music Competition grew out of a series of concerts inaugurated at Over-Seas House London in 1947 under the banner ‘Festival of Commonwealth Youth’. Over the past 60+ years the competition has grown in scope and prestige and now awards in excess of £60,000 annually for solo performers, accompanists and chamber ensembles. Past ROSL prizewinners include RCM alumni John Lill, Melvyn Tan, Jonathan Lemalu and, most recently, RCM baritone Morgan Pearse (2013) and RCM saxophonist Huw Wiggin (2014).