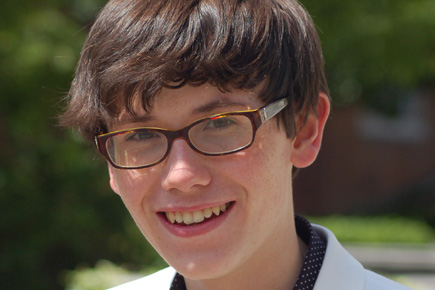 His impressive programme of J S Bach, Liszt, Moszkowski and Barber secured him a place in the competition’s Semi-Final, which will be aired on BBC Four on Saturday 17 May.

Martin is one of four brilliantly talented RCM musicians who made it through to the 2014 category finals of this prestigious competition, with first-year percussionist Stefan Beckett, second-year pianist Ning Hui See and RCMJD percussionist Matthew Farthing all competing too.

In addition, the judges enjoyed outstanding category final performances from violinists Elizaveta Tyun and Roberto Ruisi and harpist Juliana Myslov - all starting their studies at the RCM in September - and former RCMJD flautist Daniel Shao.

If Martin is successful in the competition’s semi-final he will go on to compete in the grand final on Sunday 18 May, aiming to follow in the footsteps of RCM musicians Lara Melda (2010 winner) and Laura van der Heijden (2012 winner).

All episodes of BBC Young Musician 2014 so far are available to watch on BBC iPlayer.