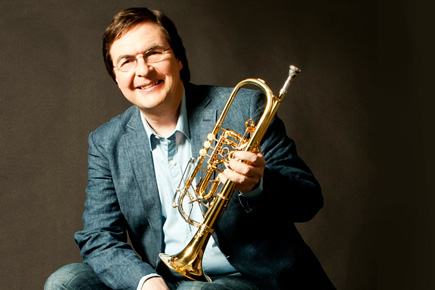 The RCM is delighted to announce the appointment of world-renowned trumpet virtuoso Matthias Höfs as Visiting Professor, from January 2015.

During his time at the RCM, Matthias will be offering one-to-one tuition, masterclasses and recitals. He will also be playing alongside students in the RCM Brass Ensemble.

Matthias Höfs says: 'I am honoured to be invited to this highly renowned musical institution. During my last visit I truly enjoyed the warm welcome by my colleagues and the student body. It will be an inspiration performing with musicians of this calibre, and I look forward to passing on my enthusiasm for the German brass tradition.'

Nigel Black, Head of the RCM Brass Faculty,says: 'It is my great pleasure to welcome Matthias to our faculty as Visiting Professor. He is a truly inspirational teacher and one of the greatest brass players of our time.'

A key member of GERMAN BRASS since 1985, Matthias Höfs has performed internationally with the ensemble. At the same time he was appointed solo trumpet with the Hamburg Philharmonic and held this position for sixteen years. He has been invited to play with numerous distinguished German symphony orchestras, including the Berlin Philharmonic, the Munich Philharmonic, as well as major German radio orchestras.

In addition to his extensive concert performances as soloist and chamber musician, Höfs has made over twenty recordings with GERMAN BRASS. In his concerts and recordings Höfs introduces his own innovative arrangements, which continue to inspire the world of brass (his latest recording HOMMAGE! showcases his arrangements of chamber sonatas composed by Carl Philipp Emanuel Bach).

Matthias studied at the Hochschule für Musik und Theater Hamburg and at the Berlin Philharmonic Orchestra’s Karajan Academy, graduating with distinction in 1984.  As a guest lecturer he is appreciated all over the world.

Alongside his distinguished playing career, Matthias is noted for designing many of his own instruments, working alongside famed brass-makers the Thein brothers in Bremen, Germany. Aside from established trumpet types, they have developed historically inspired instruments, such as the keyed trumpet. Custom designed special instruments, like the double bell trumpet and the wooden trumpet, complete their instrumental range.