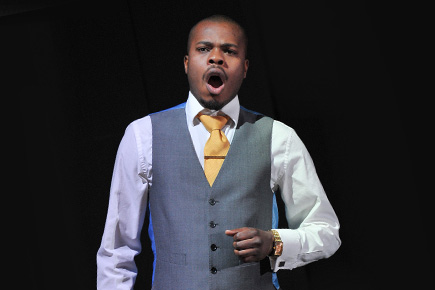 RCM singers have continued to impress in recent competitions and performances.

Soprano Soraya Mafi, a recent graduate of the RCM International Opera School studying with RCM professor Janis Kelly, has won the First Prize of £5,000 in the Singers’ Section of the Royal Over-Seas League (ROSL) Competition, accompanied on piano by RCM alumnus Ian Tindale. This is the third year in a row that an RCM singer has won the Singers’ award, with alumni Anna Rajah and Morgan Pearse triumphing in previous years. Soraya will go on to compete for the Gold Medal and First Prize in the competition’s grand final on Monday 1 June.

Congratulations also go to RCM bass baritone Simon Shibambu, who won both the Audience Prize and First Prize in the prestigious Clonter Opera Singing Competition on Saturday 7 February. The South African singer - pictured as Sarastro in the RCM’s recent production of The Magic Flute - was awarded the top prize of £2,000 by a distinguished panel of judges.

Finally,  we offer our congratulations to alumnus Greg Batsleer, one of the UK's busiest choral conductors and chorus masters, who was this month awarded the first ever Arts Foundation Award for Choral Conducting.