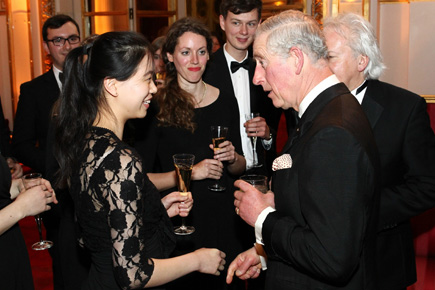 The RCM at Buckingham Palace

Musicians from the Royal College of Music and members of Opera Australia have given a special joint performance at Buckingham Palace hosted by His Royal Highness The Prince of Wales.

The Prince of Wales has been President of the RCM for over two decades, and this event on Thursday 22 January 2015 celebrated his long-standing support of both the RCM and of Australian opera.

The concert took place in the historic ballroom of Buckingham Palace and featured performances of operatic extracts by Bizet, Puccini and Léhar by an orchestra of over 40 RCM musicians conducted by RCM Director of Opera Michael Rosewell.

A highlight of the evening was a performance by Taryn Feibig on a cello once owned and played by The Prince of Wales – an instrument which is currently part of the RCM’s collections.

His Royal Highness said of the evening ‘I promise you, nothing could give me greater pleasure than to (support) this because I am one of those people who so admires the talent of young people’.

As President of the RCM, The Prince of Wales enjoys performances from some of the RCM’s most outstanding performers at our annual awards ceremony. In 2013 His Royal Highness  celebrated 20 years of Presidency of The Royal College of Music by instigating a new honour; The President's Award.