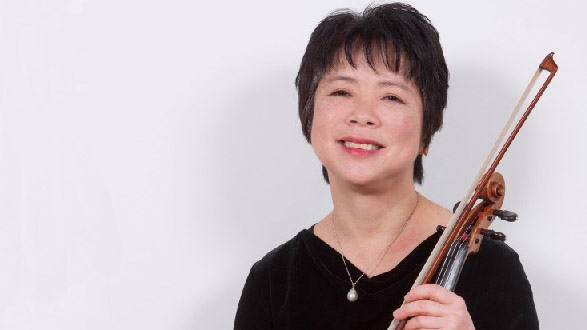 Eri Konii is an enthusiastic advocate of the German tradition of violin playing as typified by Carl Flesch. After completing her studies with Leonard Hirsch and Maria Lidka at the Royal College of Music in London, Eri studied in Switzerland with the great violin pedagogue, Professor Max Rostal OBE. She also participated in masterclasses with Franco Gulli and Trio di Treste in Siena and with the Borodin Quartet in Sermoneta, Italy. She was also fortunate to have studied the piano with Yonty Solomon at RCM and with Maria Curcio.

Since her debut appearance as a violinist at the Stuttgart International Bach Festival in the early 1990s she has played widely internationally as a soloist, chamber and orchestral musician. Memorable performances include concertos in Damascus with the Syrian National Orchestra, recitals in Sweden to commemorate the bicentenary of Mozart’s death, and touring with Yehudi Menuhin around Eastern Germany with the English Symphony Orchestra of which she was the leader of the second violins for some years.

She continues now to work on various projects including a number of unaccompanied repertoire recitals, playing in various ensembles and as a freelance orchestral player in London. She is a dedicated teacher, both privately and at Junior Department where she has taught for a number of years. She was also a co-translator for the Japanese edition of Szigeti’s Szigeti on the Violin [Tokyo: Sinfonia Publications, 2005] and as a result of the success of this is now embarking on work on the same author’s The Ten Beethoven Sonatas for Piano and Violin.