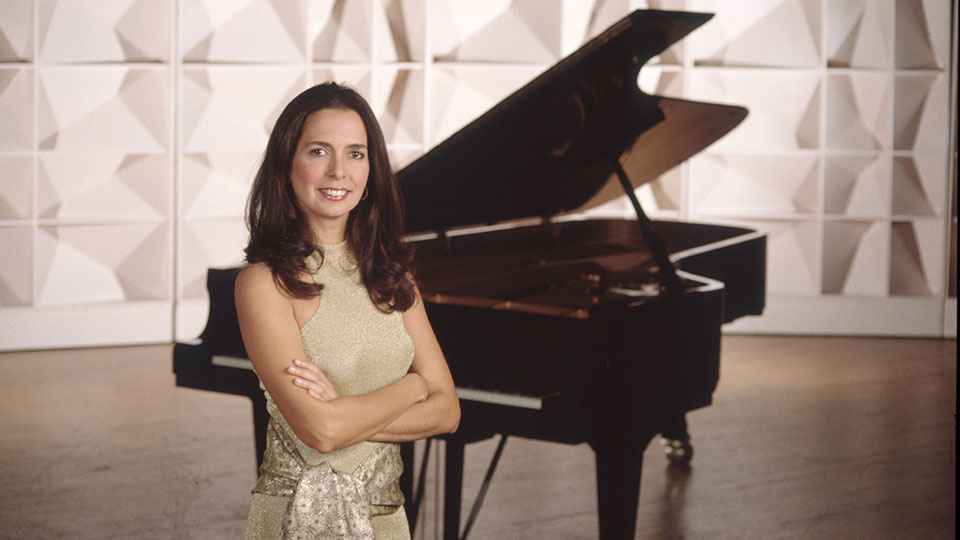 Clara Rodriguez is one of the most distinguished of the present generation of international artists. Her way of concert programming have consistently contrasted traditional classical music with the output of South American composers.

Since coming to London at seventeen to study at the Royal College of Music with Phyllis Sellick, she has performed to great acclaim as a soloist at Southbank Centre, Wigmore Hall, Barbican Centre and at St John’s Smith Square.

In Caracas, aged sixteen she made her debut playing Mozart Piano Concerto No 27 with the Simón Bolívar Orchestra under the baton of José Antonio Abreu; from then on Clara Rodriguez’s career as a concert pianist has taken her to tour in Europe, India, Egypt, Tunisia and the Americas. Her playing is described as highly expressive, sensitive with considerable digital clarity and stylistic acumen.

Glowing reviews are regularly written about her concerts and discography on the Nimbus label which includes CDs of the piano music of composers such as Ernesto Lecuona, Moises Moleiro, Federico Ruiz and Teresa Carreño “Clara Rodriguez provides performances of alluring vivacity allied to that most essential of requisites-CHARM.” Gramophone

She published a collection of dances by 18 different composers in her CD “VENEZUELA” of which critic Jeremy Nicholas wrote “Clara Rodriguez makes the most of her innate feel for the exuberant and languorous, dispatching the toe-tapping cross-rhythms with panache and a light touch. A treasure chest from which to cherry pick”

Other CDs by Clara Rodriguez are Chopin Late Works and Clara Rodriguez & El Cuarteto Live in concert in Caracas. They are regularly played on BBC Radio 3 and networks worldwide.

She has commissioned and premièred many works including Federico Ruiz’s Second Piano Concerto which she recorded with the Orquesta Municipal de Caracas and played this year (2014) in the celebrations of the 39th El Sistema Anniversary.

Clara Rodriguez has founded and directed three music festivals: San Martin Theatre of Caracas 1993-1998 which took place in area of the city where there had never been artistic events; Clara Rodríguez Bolívar Hall Concert Series London 2013 and A Legendary Piano Festival in Caracas 2013, for the 2014 edition there will be ten piano concerti played with four different orchestras plus solo recitals.

Clara Rodriguez is a repertoire adviser to the Associated Board of the Royal Schools of Music and has edited piano albums for Spartan Press Publishers.

Her latest Saint Martin-in-the Fields recital "Appassionata Sonata by candlelight" was received with a standing ovation from the large audience, many congratulatory messages were sent to the artist, the following gives a good insght into the programme played: “World music indeed! The concept could not have become more clear in our minds after listening to Clara Rodriguez interpretations of works by Bach, Beethoven, Prokofiev, Albéniz, Villa-Lobos, the Venezuelans Teresa Carreño, Luisa Elena Paesano, Luis Zea and the Argentinean Ariel Ramírez.

Clara’s expressive and powerful performances conveyed great lyricism to a magnetized audience entwining the works of these composers in a unity of spirituality in time and space at Saint Martin-in-the-Fields. Clara Rodriguez has again demonstrated that musical poetry is a universal means of communication. A true tour de force, an unforgettable evening.”

“Clara Rodriguez’s vibrant temperament and her rhythmic èlan mark her out as a leading exponent of Latin American music. She is a very special artist.” RCM Professor Niel Immelman

“Playing with a passion that keeps her from coming up for air, she delivers the contemporary classic works with a fluidity and grace that takes things to a whole other level of the game. One of those players that makes you wonder how she can make so much sound all by herself. Do not go to hear her expecting it to be some wine and cheese recital music, this is a South American piano playing gem. A winner throughout.” Chris Spector. Midwest Review. US