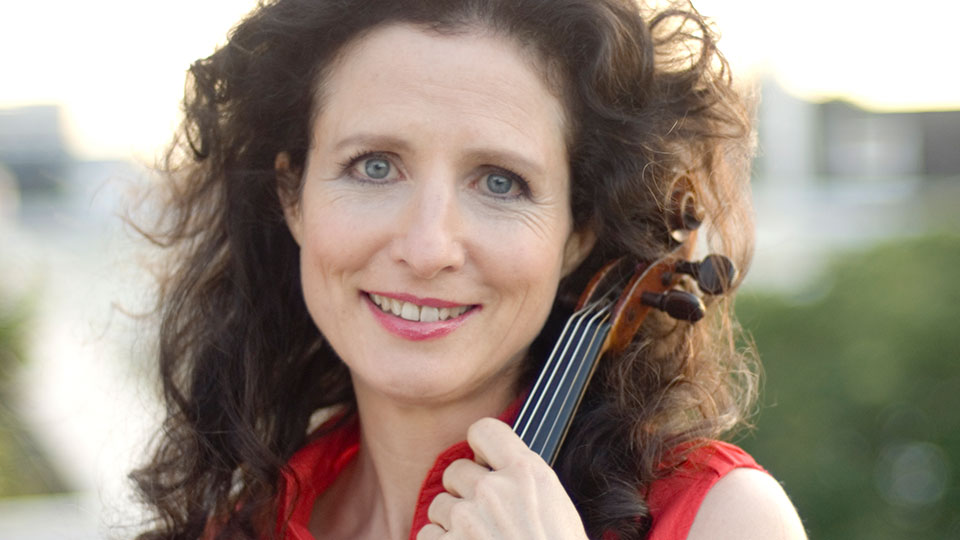 Madeleine Mitchell has a distinguished career as violin soloist, chamber musician, dedicated teacher and artistic director. She has performed in 50 countries and made many recordings and broadcasts, whilst making a regular commitment to her RCM teaching.

Madeleine Mitchell has been a professor at the RCM since 1994 and served as a member of the RCM Council, elected by the professors, 2013-2016. Her students have won prizes including the Making Music and Park Lane Young Artists' Awards. She was appointed Graduate Pathway Leader for Solo/Ensemble students for ten years, for which she instigated Performance Seminars, drawing on her wide experience.

She's taught Practical Skills and frequently chaired examination panels, coaches chamber music and mentors students in the Centre for Performance Science. She was the violin professor leading on the major EU funded research project, TELMI. Madeleine was a Junior Exhibitioner (on piano and violin) and Foundation Scholar at the RCM, winning the Tagore Gold Medal and other prizes. As Fulbright/ITT Fellow to New York, she was awarded a Master's degree, studying at the Eastman and Juilliard schools, with Dorothy DeLay, Donald Weilerstein and Sylvia Rosenberg as her graduate assistant. She gives master classes worldwide and has given lecture-recitals and lectures including the Institute of Musical Research/CMPCP. She has served on the jury of international competitions and young musicians' awards. She teaches on courses including, Orfeo Music Festival and Language and Music for Life, is Consultant at the Royal Welsh College of Music and Drama and Visiting Lecturer at City, University of London.

Madeleine Mitchell has performed concertos with orchestras such as the Polish Radio and Czech Radio Symphony, Munich and Wurttemberg Chamber, Royal Philharmonic and other London orchestras, Kiev Radio/TV, St Petersburg Philharmonic, Bahia Orchestra Brazil and for the BBC. She is a frequent recitalist of all the standard repertoire as well as works written for her by well-known composers.

Her recitals have included Lincoln Center (including representing Britain at the festival UKinNY), Sydney Opera House, Seoul Center for the Arts, and many festivals including the BBC Proms and as Artist-in-Residence at the Canberra International Music Festival. Her recent engagements have included tours of the USA, China, recitals in London at Wigmore Hall, Vienna and Singapore and a violin concerto written for her, recorded live with the BBC National Orchestra of Wales which featured on her album of world premiere recordings of violin works by established UK composers, accompanied by RCM piano professor, Nigel Clayton and Madeleine's former RCM student Cerys Jones. She returned to perform with BBC NOW last season in Grace Williams Violin Concerto and Vaughan Williams The Lark Ascending, broadcast live on BBC Radio 3.

Madeleine Mitchell founded and directs the London Chamber Ensemble, winning a Royal Philharmonic Society Enterprise Award to make a film in 2022 combining music and art with the Fabergé exhibition at the V&A. She has collaborated with many artists in various chamber groups including quartets, trios, music theatre and two major Arts Council supported projects, which she devised with percussion and voices. Her duo with pianist Noriko Ogawa won the GBSF Award. At the beginning of her career, she was the violinist/violist in Sir Peter Maxwell Davies' seminal group 'The Fires of London'.

Her recording of MacMillan's Motet with solo violin was BBC Music Magazine's CD of the Month. 2022 sees the release of a short film with RCM professor Errollyn Wallen CBE of the work written for Madeleine for violin and piano, Sojourner Truth, premiered on International Women's Day 2021.

Known for her creative programming, Madeleine Mitchell founded the eclectic international Red Violin festival under Lord Menuhin's patronage, with Ida Haendel subsequently as Hon President, celebrating the fiddle across the arts and receiving wide media coverage. They also feature several RCM violinists and RCM archive portraits, for which she was shortlisted for both Creative Briton and European Women of Achievement Awards. It takes place again in Leeds in May 2025.