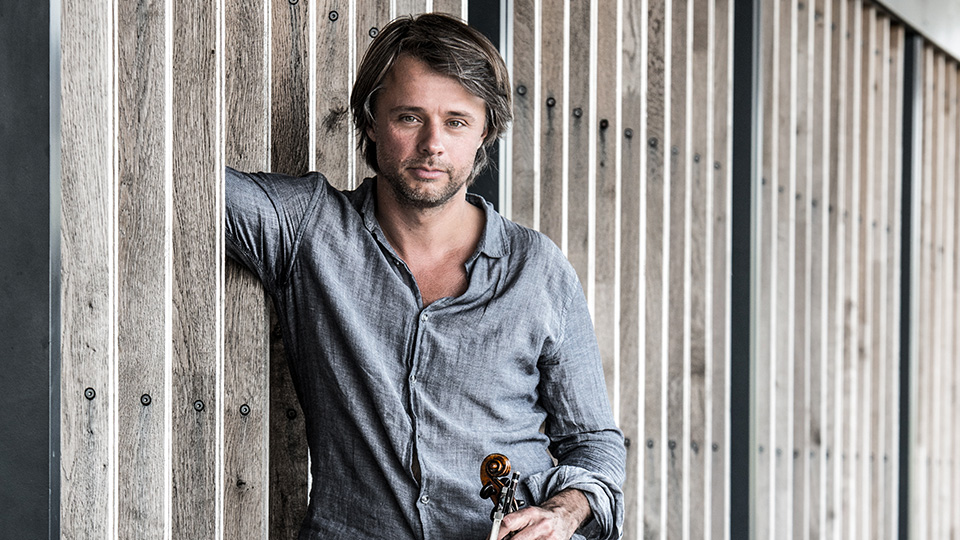 Daniel Rowland was born in London and grew up in the Netherlands, studying with Davina van Wely and Viktor Liberman in Amsterdam and with Igor Oistrakh in Brussels. He worked intensively with Herman Krebbers, Ruggiero Ricci and Ivry Gitlis. Having won various national and international prizes, such as the Brahms Prize of the Brahms Society in Baden-Baden and the prestigious Oskar Back competition at the Amsterdam Concertgebouw, he made his concerto debut at the Concertgebouw in 1992, performing the Tchaikovsky Concerto. This launched a busy international career as a soloist, recitalist, chamber musician and director.

As a soloist, Daniel has performed widely in venues like the Concertgebouw in Amsterdam, Carnegie Hall in New York, the Royal Albert Hall in London, the Glinka Hall in St. Petersburg, Symphony Hall in Birmingham, City Halls in Cape Town and the Gulbenkian in Lisbon, with noted conductors such as Andrei Boreiko, Djanzug Khakidze, Viktor Liberman, Lawrence Foster, Heinz Holliger, Francois Xavier Roth, Diego Masson, Lev Markiz, James Laughran and Jaap van Zweden. Apart from the core classical and romantic repertoire Daniel is an enthusiastic advocate of 20th and 21st century music, appearing as a soloist with ensembles such as the Nieuw Ensemble (Amsterdam) Musikfabrik (Köln), and Contrechamps (Geneva). Recent highlights include the Berg Kammerconcert under Heinz Holliger, Saariaho's Graaltheater (Geneva) and Ferneyhough's Terrain - as well as Berio's Sequenza at the Wigmore Hall. In 2009 his recording of the Vivaldi/Piazzolla 8 Seasons was released to critical acclaim.

A passionate chamber musician, Daniel has performed with artists as diverse as Ivry Gitlis, Polina Leschenko, Heinz Holliger, Dawn Upshaw, Alexander Lonquich, Priya Mitchell, Marcelo Nisinman, Michael Collins, Tunde Jegede, Nicolas Daniel, Alexander Baillie, Natalie Clein, Willard White and Elvis Costello. He is a frequent guest at international chamber music festivals such as Kuhmo, Stellenbosch, Trecastagni, Ljubjana, Perth, Povoa de Varzim, Osnabrück and Oxford. In 2009 he founded ChamberJam Europa with violinist Priya Mitchell, a ground breaking new group consisting of some of Europe's most exiting young soloists. The Stift International Music Festival, of which he is founder and Artistic Director, will have it's 6th edition in August 2010. The summer festival at an idyllic spot in the eastern Netherlands with concerts given in a small 14th century church with special acoustics has gathered acclaim as a festival of exceptional intimacy and intensity.

In July 2007 Rowland joined the renowned, London-based Brodsky String Quartet as their new first violinist. The Brodskys have an international performing and recording schedule with concerts in Australia, Mexico, the far east and throughout Europe in '09/'10. They are the International Chamber Music Fellows at the RSAMD in Glasgow and are in residence at Cadogan Hall in London.

In demand as a soloist/director and conductor, he has been invited to work with the Gulbenkian Orchestra Lisbon, Camerata Scotland, the Tromsø Chamber Orchestra (Norway), the Chamber Orchestra of South Africa and the London Mozart Festival Orchestra, among many others. He has been invited as guest concertmaster by renowned orchestras such as the Philharmonia, the BBC Symphony Orchestra, the Royal Philharmonic and the Russian National Orchestra, with conductors such as Muti, Pletnev, the late Haitink, Ashkenazy, Dohnanyi, Harnoncourt and Gergiev.

Daniel is professor of violin at the Royal College of Music in London and visiting professor at the Royal Scottish Academy of Music & Drama in Glasgow. He gives masterclasses all over the world, in places as far afield as Italy, Portugal, Finland, Mexico, Hong Kong, Australia, and South Africa. His instrument is by Lorenzo Storioni, Cremona 1776.