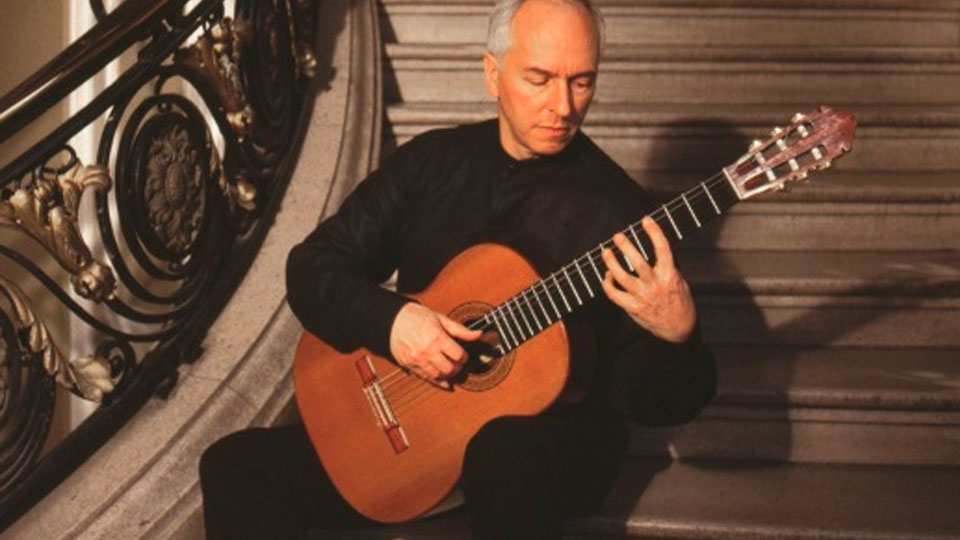 Born in Melbourne, Australia, John Williams can be regarded as a foremost ambassador of the guitar. He was taught by his father, afterwards attending summer courses with Segovia at the Academia Musicale Chigiana in Siena, Italy, and studying music at the Royal College of Music in London. By the early 1960s he had performed in London, Paris, Madrid, Japan, Russia and the US: he has since toured the world playing both solo and with orchestra and regularly on radio and TV.

Amongst his collaborations with other musicians, those with Julian Bream, Itzhak Perlman, Andre Previn, Cleo Laine, John Dankworth and Daniel Barenboim are particularly important. His other musical activities have included the groups SKY, John Williams and Friends, Attacca, The National Youth Jazz Orchestra with Paul Hart, Paco Pena, the Chilean group Inti-Illimani, and various collaborations with Richard Harvey.

John Williams maintains a wide-ranging interest in contemporary music. Examples have included his recording of music by the Japanese composer Toru Takemitsu with the London Sinfonietta, an album featuring the music of Peter Sculthorpe and Nigel Westlake called From Australia and his CD of music by the Cuban composer Leo Brouwer, called The Black Decameron, which includes Brouwer's Fourth Concerto. His many other recordings include several of Rodrigo's Concierto de Aranjuez, concertos by Richard Harvey and Steve Gray, Vivaldi Concertos, The Great Paraguayan, John Williams plays the Movies, The Guitarist (which includes his own Aeolian Suite with string orchestra) the Arpeggione sonata by Schubert and Concerto op 30 by Giuliani with the Australian Chamber Orchestra, in which he plays an 1814 Guadagnini guitar. The highly successful Profile and The Seville Concert, both directed by David Thomas for London Weekend Television's South Bank Show, are particular examples of John Williams’ enthusiasm for communicating music on television.

In 2001 Sony Classical released his CD entitled The Magic Box in which his group 'John Williams and Friends' presented adaptations of African music. This includes music from Senegal, Cameroon, Zaire, South Africa, Madagascar and Cape Verde. The group toured the U.K., United States, Australia, Singapore, Malaysia Germany, Spain and Italy. Other recent releases by Sony Classical include his solo CD entitled El Diablo Suelto, a collection of Venezuelan music by composers including Figueredo, Sojo, Lauro, Fernandez and Gutierrez, The Ultimate Guitar Collection and duo CD Places Between with jazz guitarist John Etheridge, recorded live in Dublin. John’s most recent release is a solo CD From a Bird, a collection of his own pieces and some traditional Irish tunes, available online from www.fretsonly.com.

John Williams’ duo with Richard Harvey has seen them travel throughout the UK, Europe and the Far East with their World Tour programme. His Together & Solo programme with John Etheridge includes solo sets from each of them and together includes original compositions from both artists, music from Africa and the US, and a new commission by composer Paul Hart. In the 2009/10 season John Williams and John Etheridge tour the UK and Europe. John gives solo recitals in the UK and Japan and tours the UK with the English Chamber Orchestra.

In 2007 he was presented with an Edison lifetime achievement award.