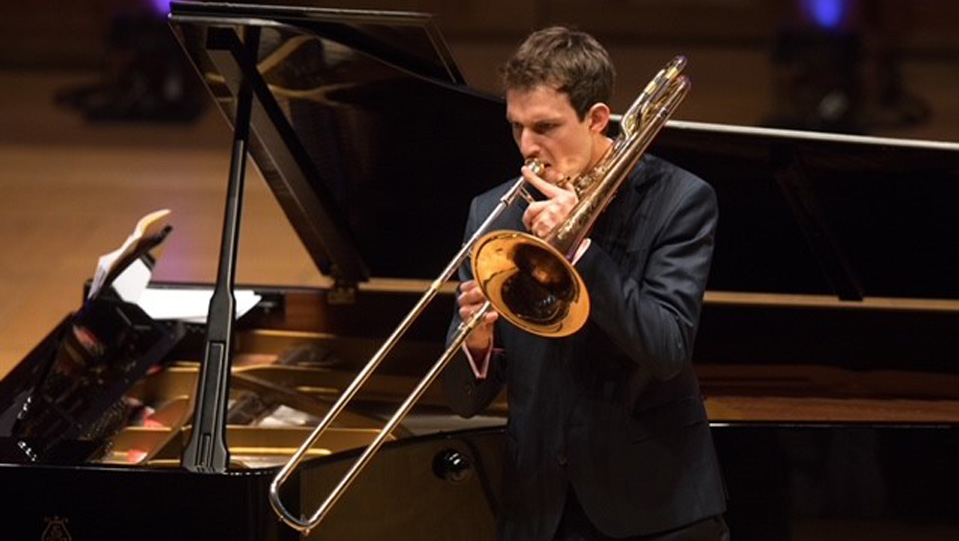 James Buckle is a 29 year old bass trombonist and one of the UK’s most exciting and gifted young musicians. At the age of 23 he became the only brass player in history to win the Royal Over-Seas League Gold Medal, following in the footsteps of some of the world’s most revered musicians, such as Jaqueline Du Pre, and receiving great acclaim from international soloists including baritone Jonathan Lemalu, oboist Nicholas Daniel and pianist Piers Lane. A year later James was appointed Principal Bass Trombone of the Philharmonia Orchestra; the latest in a globally respected lineage of bass trombone players that include Ray Premu, Bob Hughes, Keith McNicoll, and Christian Jones. In the same year James was invited to join John Wilson’s Sinfonia of London where he has recorded Kenneth Fuch’s Bass Trombone Concerto, and Sir John Eliot Gardiner’s Orchestre Revolutionnaire et Romantique and English Baroque Soloists. For the last two years James has been a Trustee on the Board of Directors of the Philharmonia.

In 2019, James was appointed as a Professor at the Royal College of Music, London, having previously been assistant professor to Ian Bousfield at the Hochschule der Künste, Bern, Switzerland. In the three years since, James has built up a formidable class of bass trombonists that are winning auditions and working in orchestras both in the UK and abroad. He is in demand as a teacher outside of the RCM and has given masterclasses at Guildhall School of Music and Drama, RNCM, Trinity Laban Conservatoire of Music, São Paulo University of Music, and Wells Cathedral Specialist Music School.

Passionate about modern music, James has commissioned solo and chamber pieces for the bass trombone and has performed three contemporary concertos with orchestra, including a world premiere. As a freelance musician he has played as guest principal with the Orchestre de la Suisse Romande, Aurora, BBC Concert, BBC Philharmonic, BBC Scottish, Bournemouth Symphony, Hallé, London Philharmonic, London Symphony, Royal Philharmonic and Royal Philharmonic Concert, Ulster, English National Opera, Royal Opera House Covent Garden and Welsh National Opera Orchestras as well as the Academy of St Martin in the Fields, London Sinfonietta, Royal Northern Sinfonia, European Philharmonic of Switzerland, and the Orchestra of Europe. He regularly plays in West End musicals including The Lion King, The Phantom of the Opera, 42nd Street, Les Miserables, Sweeney Todd, and Sunset Boulevard. He has appeared in several Film, TV, Game, Pop & classical recordings and is a former member of both the Gustav Mahler Jugendorchester and the European Union Youth Orchestra.

James studied at the Royal Academy of Music where he held a full scholarship and received awards from the David Richards Memorial, Oldhurst Charitable, Countess of Munster and Craxton Memorial Trusts. Whilst studying at the Academy James grew an interest in developing his solo career; he won first prize in the Drummond Sharp Prize for Brass and the British Trombone Society Bass Trombone competition; he was invited to perform in front of the Academy’s Symphonic Brass in the Duke’s Hall and he premiered a Concerto for Bass Trombone and Viola by Ian Pillow. James graduated in 2015 with a First Class (Hons) Bachelor’s Degree. In 2018 James was made an Associate of the Royal Academy of Music.

James has long been a 'sports-nut' and alongside following the global sporting scene and his passion for road cycling, James recently began solo-skydiving and jumps from the Hinton drop zone in Northamptonshire.