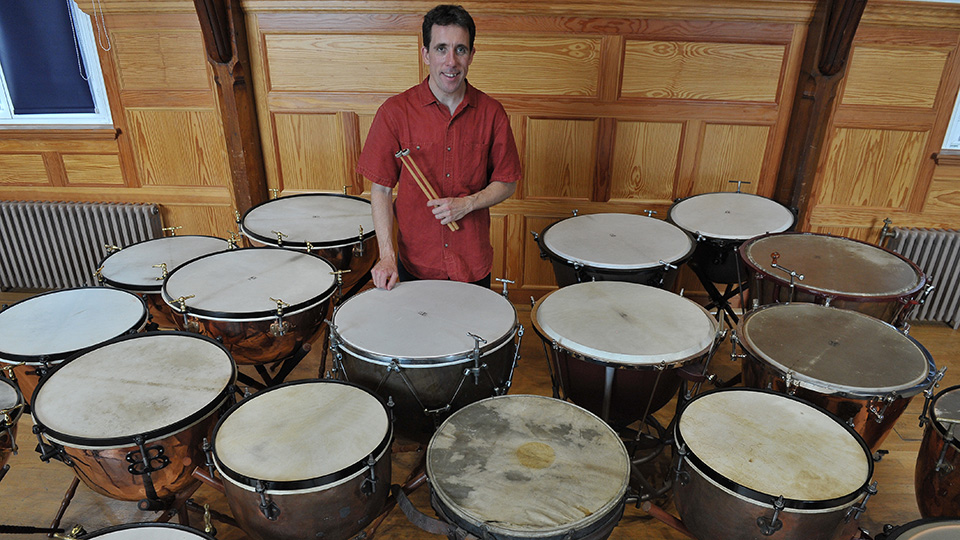 In addition to his position as Principal Timpani with the Orchestra of the Age of Enlightenment, Adrian appears regularly with many of London’s symphonic, chamber and period-instrument orchestras, enjoying a varied and stimulating career. Following his studies at the Royal Academy of Music, Adrian enjoyed many inspiring experiences playing with the European Community Youth Orchestra under conductors such as Haitink, Ashkenazy and Giulini. He appears frequently all around Europe, has toured Australia, China, Japan, Russia, South Africa and South America, and regularly visits the USA. Highlights include The Rite of Spring with Salonen and the Philharmonia, Britten’s Nocturne with the SCO, and researching and sourcing 19 timpani and the percussion instruments for the first ever period-instrument recording of Berlioz’ Grande Messe des Morts. Adrian has played for numerous productions at the Glyndebourne Festival with the LPO and OAE, and has been Principal Timpanist of Glyndebourne on Tour since 2002. His recordings include Beethoven’s fourth and seventh symphonies with the Academy of St Martin-in-the-Fields directed by Joshua Bell, Sibelius’ fifth symphony and Britten’s Peter Grimes with the late Sir Colin Davis, and Beethoven’s fourth and eighth symphonies under Haitink, all with the LSO. Adrian can be heard on many film soundtracks including Harry Potter and the Goblet of Fire, Richard III, Philadelphia, Enigma and Cliffhanger. Adrian works closely with Pete Woods of ‘Potter’s’ and is much in demand as an advisor to players and orchestras around the world who are looking to find earlier-sounding timpani that suit modern orchestras. In 2016 Adrian published his teaching book Bending Bach’s Basslines and has composed and arranged material for the Associated Board’s new percussion syllabus. He has given masterclass at Brussels Royal Conservatoire, Chetham’s, Trinity Laban, Guildhall, and at the Adams Percussion Festival and has appeared at the RCM Festival of Percussion.