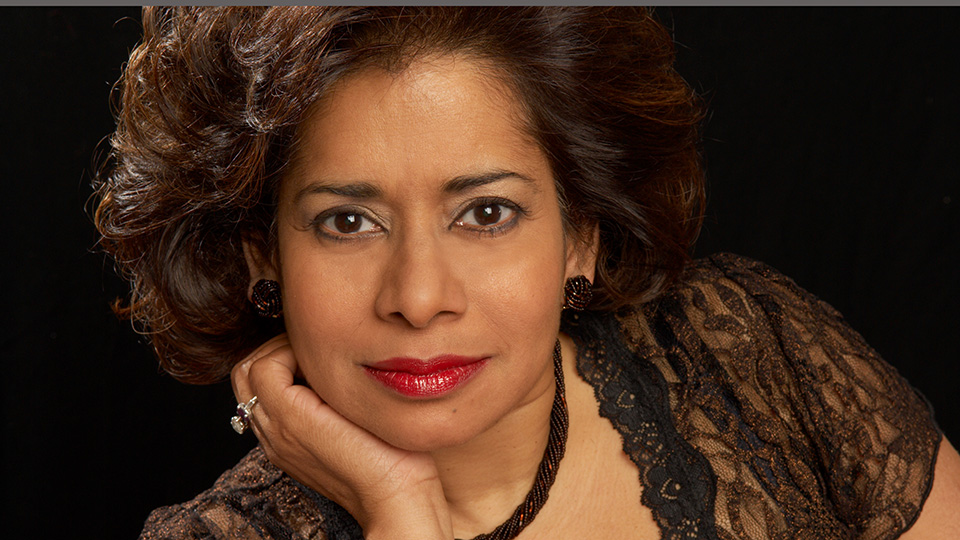 Born in Bombay, Patricia Rozario studied at London’s Guildhall School of Music, winning the Gold Medal and the Maggie Teyte Prize. She went on to the National Opera Studio in London and won prizes at the Mozarteum' s Hertogenbosch, B&H and IYCAC International Singing Competitions. Since then her career has developed in opera, concert work, recording and broadcasting. Her unique voice and artistry has inspired over 15 of the world’s leading composers to write for her, notably Arvo Pärt and Sir John Tavener, who alone has now written over thirty works for her, making their collaboration unique in the contemporary field.

She has sung under Pritchard, Solti, Ashkenazy, Jurowski, Belohlavek, Gardiner, Pinnock, Ivan Fischer, Hickox and Andrew Davis, sung opera at Aix-en-Provence, Amsterdam, Lyon, Lille, Bremen, Antwerp, Wexford, ENO, Glyndebourne and Opera North, and given concerts in North America, Canada, Russia, the Far East, Australia, throughout Europe, and at all the major UK venues, in recitals with Helmut Deutsch, Graham Johnson and Julius Drake among others.

Her wide concert and opera repertoire ranges from baroque to contemporary music. She has given the premiere performances of many pieces written especially for her, by Pärt, Roxanna Panufnik, John Casken, Jonathan Dove, Simon Holt, Param Vir, John Woolrich, Errolyn Wallen, Andrew Gant and many by Tavener. She appears frequently at the BBC Proms.

Patricia was trained by Jeffrey Talbot, whose teaching follows the Italian bel canto style as propounded by Eduardo Asquez and Joseph Schmidt. She is equally at home with young singers in their undergraduate years as with more advanced students doing postgraduate study.

Patricia has been professor at RCM for seven years. She maintains the discipline of working the voice thoroughly through the range until fluency and ease are acquired, laying the foundations of a solid technique necessary for today's profession. Her students have won many prizes at the College and externally, and are starting to have success in making professional careers.

With her husband, pianist Mark Troop, Patricia has recently founded a vocal institute in India. Giving Voice to India prepares Indian students for study in the west and for potential careers in music. In just three years the course has propelled six singers for international study. She also is in charge of the singing course at BIMF, a summer music festival at Ardingly.

Patricia was awarded the OBE in the New Year’s Honours, 2001 the Asian Women’s Award for achievement in the Arts, 2002 and the Global Goan Award, 2007.