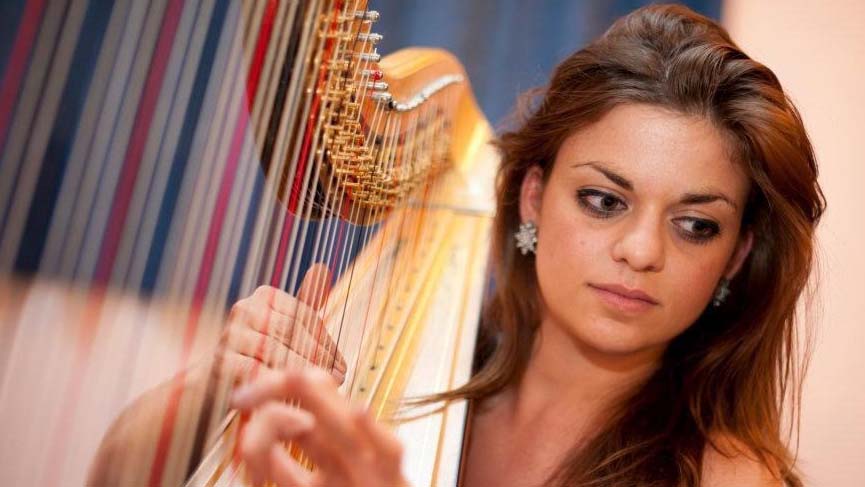 Cecilia studied at The Purcell School of Music and graduated with firstclass
honours from The Royal College of Music where she completed
both her Bachelor of Music and Master of Performance degrees,
studying under Daphne Boden as an ABRSM scholar. Whilst at the RCM
she also received the Leonard and Margaret Boden Scholarship for
harp.

As a soloist Cecilia has performed at various prestigious venues
including: The Wigmore Hall, The Barbican, St. James’ Piccadilly, King’s
Place, Fairfield Hall, 10 Downing Street and Buckingham Palace. Over
the last few years Cecilia has travelled to Australia, Trinidad and Malta
for outreach work as part of The Commonwealth Resounds: an
organisation used to promote music and musicians across the
Commonwealth through collaborative events and with a particular focus
on youth and the developing world. She also provided the music for BBC
Radio 4’s adaption of The Eustace Diamonds.

Cecilia has been fortunate enough to play regularly for Royalty including
various private functions for HRH Prince Charles at Clarence House and
St. James’ Palace and events for HRH Princess Michael of Kent at
Kensington Palace.

Cecilia has made several television appearances, including the string
finals of BBC Young Musician of the Year, The Brit Awards (playing with
Dizzee Rascal and Florence and the Machine), X Factor with Michael
Buble, The Royal Variety Performance with Pumeza Matshikiza and a
Walkers Crisps Commerical alongside Gary Lineker and Stephen Fry!
Cecilia enjoys a varied career, teaching regularly, performing in
ensembles and as a soloist around the UK and most recently as a guest
entertainer on cruises.