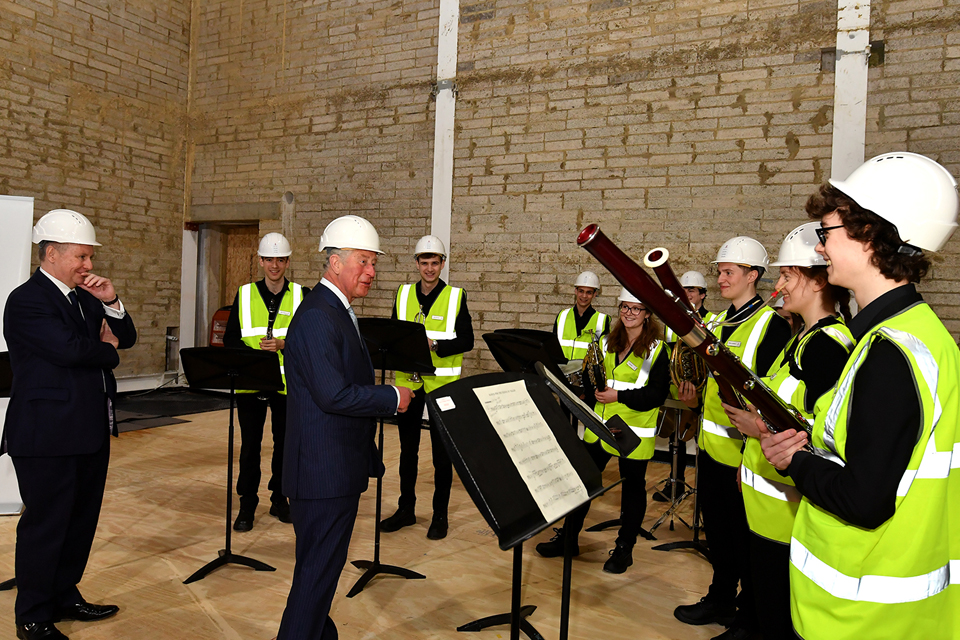 His Royal Highness The Prince of Wales today visited the Royal College of Music’s new building development during an annual visit to the institution, of which he is President.

The President’s Visit to the RCM is always a significant occasion, but this year The Prince witnessed the physical transformation taking place at the heart of the RCM’s iconic home in South Kensington. The More Music development will create two new performance spaces, a new home for the Royal College of Music Museum and additional practice rooms and social spaces. In January 2019 the new building development reached the milestone of ‘topping out’ and the project has an exciting year ahead as UK construction contractor Gilbert-Ash continues to transform the RCM's east courtyard and the structure is fitted out.

Professor Colin Lawson CBE, Director of the Royal College of Music, said: ‘The Prince of Wales has been our President for over 25 years and it was a great privilege to show him the new facilities taking shape at the heart of our iconic campus. It was also a great pleasure to perform with RCM students in what will soon become a state-of-the-art performance venue. The RCM is safeguarding the future of music for generations to come with our More Music development.’

As well as touring the new building development, The Prince of Wales conferred honours to some leading names in music during a ceremony held in the RCM’s historic Blomfield Building. Those honoured included internationally acclaimed violinist Maxim Vengerov, who has been the Polonsky Visiting Professor of Violin at the Royal College of Music since 2016. He was awarded an Honorary Doctorate (HonDMus) in today’s ceremony.

As part of the ceremony, The Prince of Wales heard a performance featuring some of the RCM’s exceptional talent: soprano and President’s Award winner Julieth Lozano Rolong, flautist Sirius Chau Kei Lok and violinist Emily Sun, both Tagore Gold Medal recipients, and pianist Martin James Bartlett who was awarded the Queen Elizabeth The Queen Mother Rosebowl.

The More Music: Reimagining the Royal College of Music building development has been made possible through the generosity of many supporters. In particular, the RCM would like to thank Founding Patrons including the Heritage Lottery Fund (HLF), Kingdom Music Education Group, Rena Lavery HonRCM & Sandro Lavery, Ruth West HonRCM & Dr Michael West and the Garfield Weston Foundation for their significant contributions.