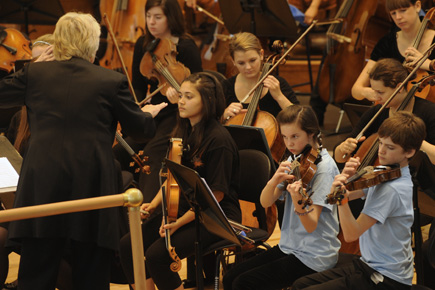 Celebrating six years of Musicians of the Future

Musicians of the Future is the flagship project run in partnership with the Royal College of Music and the Royal Borough of Kensington and Chelsea. The scheme has been running successfully for the last six years and has enabled 24 pupils each year to benefit from free one-to-one instrumental tuition.

To celebrate this landmark the RCM held a number of special events in July including an spectacular orchestral performance in the Amaryllis Fleming Concert Hall involving participants from all six years of the scheme. The 80-piece orchestra was made up of school children plus RCM student teachers and they performed a highly entertaining programme of works specially written for them by composer Sally Greaves.

The scheme has been such a great success that it has led to the founding of the Borough Orchestra. The Royal Borough of Kensington and Chelsea have founded this orchestra to bring all the participants together, and to give them a performing outlet once they have moved on from the scheme.

For more details about the scheme, please click here.