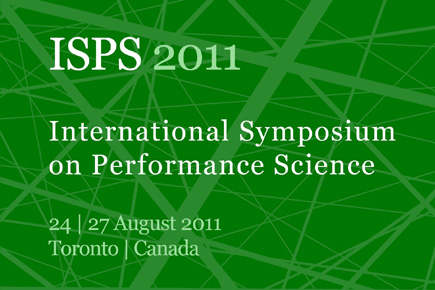 The third International Symposium on Performance Science (ISPS) has been hosted by the University of Toronto’s Faculty of Music on 24 to 27 August.

The ISPS is a biennial meeting of performers and scientist to discuss performance and the skills which underpin it. This year’s meeting explored the theme Models of Performance, ranging from models of good practice to scientific models of performance processes and products. Delegates from over 30 counties gave 117 presentations, consisting of four keynote lectures, 80 spoken papers, 30 poster presentations, two practical workshops and one graduate award paper.

The RCM was well represented with a performance and presentation given by RCM Director Colin Lawson, as well as presentations by staff Aaron Williamon, Tânia Lisboa and Rosie Perkins, recent graduate Terry Clark, and current DMus student Elena Alessandri. Articles arising from these presentations were published on 24 August 2011 by the European Association of Conservatoires (AEC).

The next symposium will focus on the theme Performing Together and will be hosted by the University of Music and Performing Arts in Vienna (MdW) on 28 to 31 August 2013. Further details will be announced soon on the conference website: www.performancescience.org.