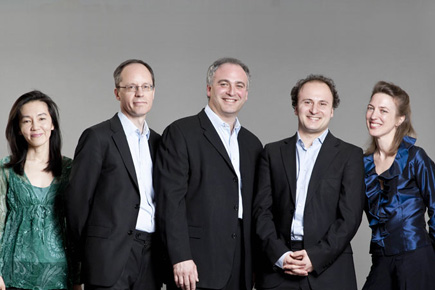 Outstanding period instrument ensemble Florilegium celebrates its 25th anniversary and eight years as Ensemble in Association at the Royal College of Music.

Head of Historical Performance at the RCM, Professor Ashley Solomon, co-founded Florilegium in 1991 and now directs the ensemble. Together they have made 27 recordings for the Dutch Channel Classics Label and given more than 1,000 concerts. To celebrate the group’s landmark anniversary they return to the Wigmore Hall with a performance of Bach’s complete Brandenburg concertos on 3 June.

Six regular players in Florilegium are professors within the RCM’s Historical Performance Faculty. The ensemble also gives five classes each term on baroque chamber music for modern and period instrument specialists, covering repertoire from Monteverdi to Beethoven. In addition three major projects take place each year, which represent significant collaborative opportunities for historical performance students. Previous projects have included a semi-staged version of Purcell’s Dioclesian with baroque dancers and the same composer’s seminal Dido and Aeneas at the Bath International Festival in 2013.

Professor Ashley Solomon says ‘our mission has always been to work with period players but also to engage and inspire modern instrumentalists who show a curiosity for this period of music. I am delighted that each year more than 100 students on all instruments engage with the RCM’s Historical Performance Faculty. Long may the relationship flourish.’

Florilegium and Professor Solomon will appear on BBC Radio 3's The Early Music Show in celebration of their 25 years together. The programme, broadcast at 2pm on Sunday 1 May, features discussion about the ensemble's recordings with Channel Classics and a sneak preview of their forthcoming Telemann CD, which is being launched at the Wigmore Hall concert in June.