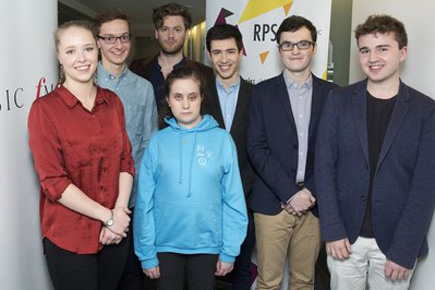 Two RCM composers are among seven young people chosen by a panel of judges from Classic FM and the Royal Philharmonic Society to write a new piece of classical music to celebrate the radio station’s 25th birthday.

The Classic FM 25th Birthday Commissions in partnership with the Royal Philharmonic Society is championing Britain’s outstanding young musical talent by commissioning six brand-new pieces of classical music, written by composers who are no older than the radio station itself.

From almost 200 applications, 16-year old Alexia Sloane and 23-year old Dani Howard were chosen to write a three-minute piece each. Along with four other winners, they will each be allocated a high-profile event at which their piece will be premiered and have their works broadcast on-air to Classic FM’s 5.4 million listeners across the UK.

Alexia is a synaesthetic blind First Study Composer at the Royal College of Music Junior Department and Second Study Recorder. She was an Aldeburgh Young Musician in 2015/16 and is one of six composers with the National Youth Orchestra of Great Britain. In 2016, she was the first female composer to win the Cambridge Young Composer of the Year competition.

Dani Howard graduated from the RCM in 2015, where she was a Rose Williams scholar supported by the Henry Wood Trust. She studied composition under Jonathan Cole as well as composition for screen under Francis Shaw. Dani has had her compositions performed internationally and enjoyed success in many international competitions, including the Royal Philharmonic Society Composition Prize for Young Composers in 2015.

Alexia said: “Opportunities to reach such audiences, particularly as a young 16-year old composer not yet established in the industry, are very rare, as is the chance to write for incredible and most inspiring musicians such as those associated with the RPS. I feel extremely fortunate and privileged to have been granted this amazingly wonderful and unique opportunity.”

For full details of the competition, visit the Classic FM website.