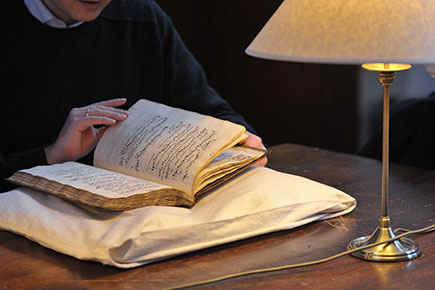 This autumn, the Royal College of Music celebrates a treasure from its collection and one of the most significant manuscripts of early 16th-century music in Britain: Anne Boleyn’s Music Book.

At the special event held on Sunday 24 September, the newly bound Music Book will be on display alongside a recently published facsimile of the manuscript. The event will include short talks by experts from the universities of Cambridge and Manchester and a rare chance to hear music from the book performed by the Alamire ensemble, who were responsible for first bringing the works to life in a 2015 recording.

RCM Director of Research Richard Wistreich comments ‘The Music Book is one of the most important sources of French Renaissance music in the world. This event offers a fascinating glimpse into the Tudor queen’s life, taking the audience as close as possible to a musical world she would have encountered as a teenage girl.’

It was possibly a gift to Anne during her formative years in the French court, the most obvious clue to the book’s ownership is an inscription which reads ‘Mistres ABolleyne nowe thus’. The fascinating collection contains 42 pieces by Renaissance composers including Josquin Desprez and its recent restoration will enable further study of its paper, decoration and musical contents by generations of scholars for years to come.

Admission is free, but tickets required. Please contact the RCM Box Office on 020 7591 4314 or book online.