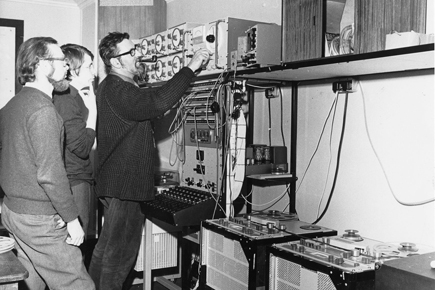 The Royal College of Music is celebrating the 50th anniversary of the RCM Studios with two special concerts this December. Founded in 1967 by composer Tristram Cary, the RCM Studios was one of the first educational electronic music studios in the UK.

Best known for his electronic music for film and television, including Doctor Who and The Ladykillers, Tristram’s idea was to instil in students a professional approach to sound creation. He was passionate about passing on his high standards to students, teaching them to achieve great sound with a variety of equipment.

Tristram built the original studio with BBC engineers after purchasing three Philips broadcast tape recorders to form its core. These machines remained in action for many years. In 1970 the studio moved into a newer building in the College, remaining there until 1994 when it gained its current purpose-built space. Now, the RCM Studios comprises state-of-the-art equipment and technology, including an 80m2 live room housing a Steinway ‘D’ concert grand.

Two concerts this December will celebrate the RCM Studios’ 50th anniversary. On 5 December, significant works from each decade are performed by professors and students who have been associated with the Studios during its lifetime. The concert includes works by Tristram Cary, Lawrence Casserley, David Burnand, Michael Oliva, Gilbert Nouno, Javier Álvarez and other current students.

In a unique collaboration with the University of Music and Performing Arts Vienna on 10 December, state-of-the-art technology meets composition in astounding style. Musicians in London and Vienna will simultaneously perform four world premieres, made possible by the latest live-streaming software.

RCM composers Edwin Hillier and Lisa Ilean are amongst those whose works are performed on 5 December. Lisa comments, ‘Staff and colleagues working within the RCM studios have been hugely supportive and inspiring over the last four years.  Working in the studios has stretched me creatively, taught me to be resourceful with musical material and focused the way I listen.’

Edwin comments, ‘I came to the RCM for my Masters writing principally acoustic music. Taking electroacoustic modules gave me the confidence and skills to broaden my creative practice and compositional output – and ultimately influenced the work I’m writing now. I still work with RCM Studios technicians on new electroacoustic music, receiving their guidance and support to realise my ideas. The Studios have been a really invaluable resource throughout my time at the RCM.’

The modern RCM Studios provides a range of services and resources for students, including music technology support, sound recording, video production and networked music facilities. MMus Composition for Screen students make extensive use of the facilities and RCM musicians record a wide range of sessions in the spaces, from solos to large ensemble performances.

The RCM Studios are responsible for recordings and broadcasts across the Royal College of Music. Recent live streams include masterclasses with Maxim Vengerov (Polonsky Visiting Professor of Violin), the RCM Symphony Orchestra performing Mahler’s Symphony no 6 and Mozart’s Requiem with the Choir of King’s College, Cambridge. Many performances are now available to watch on the RCM YouTube channel.