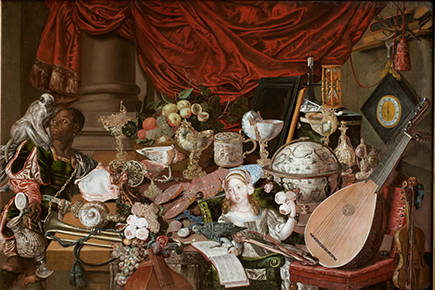 The Royal College of Music has made the first ever recording of a song by Robert Ramsey after its manuscript was discovered in a mysterious 17th century painting.

Scholars identified a detail from The Paston Treasure, an oil painting by an unknown artist as Robert Ramsey’s ‘Charon, O Charon heare a wretch opprest’, written circa 1630. The painted manuscript is so accurate that Professor Jo Wainwright of the University of York was able to reconstruct the whole piece from the only existing physical copy, held in Oxford’s Bodleian Library.

Professor Richard Wistreich, Director of Research at the Royal College of Music as well as a professional singer specialising in 17th century music, sourced the musicians needed to bring the music to life. He said: ‘In the spirit of the Royal College of Music’s general approach to research – testing scholarship through practice – we gathered together the necessary singers, including myself, and the lutenist Professor Elizabeth Kenny, to make a recording of the work in the RCM Studios.’

The recording will play throughout a major exhibition at Norwich Castle entitled The Paston Treasure: Riches and Rarities of the Known World, which centres round the eponymous painting. It was during extensive research for this exhibition that the exciting discovery was made.

The musical instruments also pictured in The Paston Treasure could not be traced but comparable examples were sourced for the exhibition, including a bass viol from the Royal College of Music Museum’s collections. The RCM Library has loaned a manuscript, one of only four books known to have belonged to the Paston Family and the only one in a complete Paston binding.  The manuscript includes works by Elizabethan and Jacobean composers for lute, another of the instruments represented in the painting.

The Paston Treasure: Riches and Rarities of the Known World runs from 23 June - 23 September at Norwich Castle. More information can be found here.