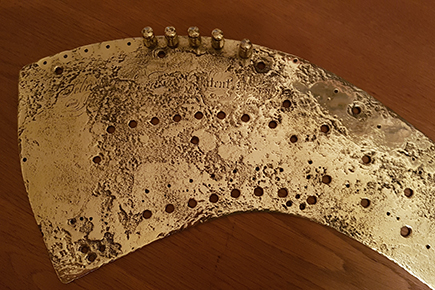 The Royal College of Music Museum and Library regularly receive enquiries from all over the world from those seeking more information about our collections or requesting our help in identifying musical items that belong to them. Occasionally, however, we get some very different requests – and this month we had one of the most unusual to date…

We received an email from a team of scuba divers who have been busy exploring a shipwreck that lies about nine miles off the coast of Eastbourne. Buried in the wreckage, they had found a piece of a musical instrument. On bringing this to the surface they realised that it was part of harp and cleaning revealed a distinct engraving: Sebastien Erard, 18 Great Marlborough Street, Serial number 5331. 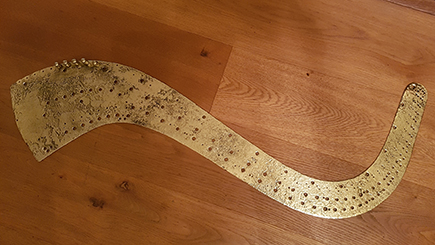 Sébastian Erard was an extraordinary man whose inventions and innovations had an important impact on music. Working in revolutionary France before fleeing to Georgian London, his innovations in harp design led to the instrument’s introduction into the classical orchestra. His pianos were equally important, and were played by composers including Beethoven, Chopin, Haydn, Liszt, Wagner and Verdi.

The divers  discovered that the RCM Museum holds Erard’s company ledgers from a search online. These important documents record the sales of 6,862 harps between 1798 and 1917. Each harp was given a serial number and Erard recorded the name and address of the person who bought each one. The divers wanted to know if we had any information about number 5331 which  might help them to date the shipwreck. Luckily the library team have digitised the Erard ledgers, so we were able to access information quickly and easily.

The ledgers revealed that harp 5331 was made in 1839. It was purchased by a Mr. S. J. Pigott of Dublin the following year. Pigott owned a large music shop in Dublin and lived until 1853. It therefore appears that the harp might have been lost on its way to Dublin from London on the ship in 1840. Unfortunately the records for Pigott’s music shop were destroyed in a fire in the 1960s, but the divers can now continue their research to identify the shipwreck armed with this useful information.

Watch footage of the dive to the Eastbourne shipwreck in the video below.

Helping to solve the mystery of a shipwreck? Just another day at the RCM…