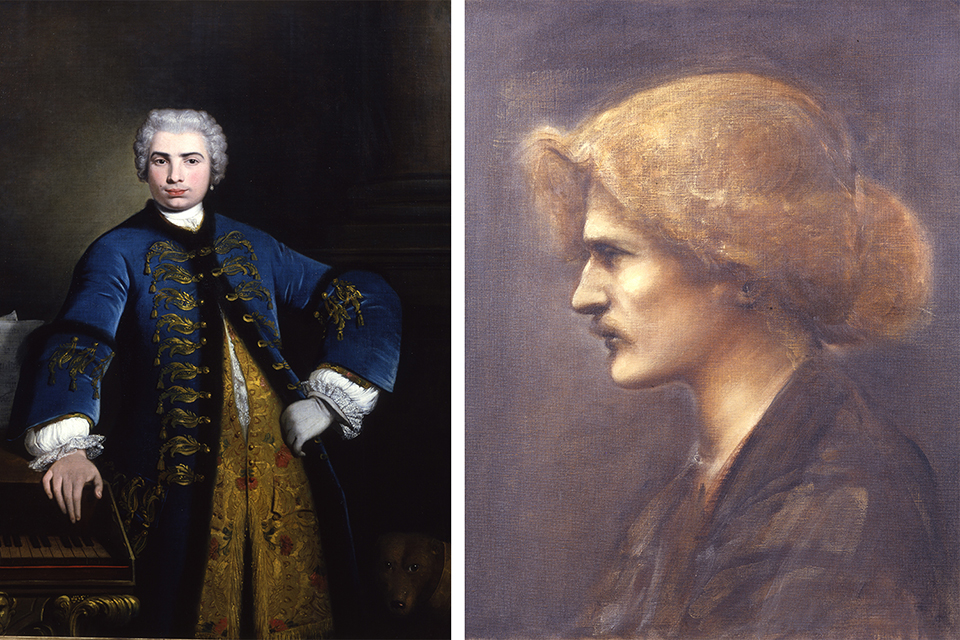 Two significant portraits from the Royal College of Music collection are on loan to exhibitions at the Tate Britain in London, Grand Palais in Paris and Palazzo Ducale in Venice. The portraits of Farinelli by Bartolomeo Nazari and Ignacy Jan Paderewski by Edward Burne-Jones will be enjoyed by exhibition-goers whilst a new home for the RCM Museum is built as part of the More Music project.

Bartolomeo Nazari’s oil painting depicts the famous castrato Carlo Broschi, better known as Farinelli. One of the greatest opera singers of the 18th century, Farinelli made his debut as a teenager and quickly gained fame across Italy and Europe. He lived in London until 1737 before becoming Chamber Musician to King Philip V of Spain. Nazari was a society artist whose sitters included Emperor Charles VII. In his portrait of Farinelli some of the physical abnormalities caused by castration are evident, including his small head, full cheeks and overbite. His opulent clothes signify his wealth, whilst the dog is said to suggest Farinelli’s fidelity.

Farinelli’s portrait is very large, measuring approximately a metre across and a metre and a half in height. It features in an exhibition entitled Magnificent Venice: Venice, the Arts, and Europe in the Eighteenth Century, held at the Grand Palais in Paris from September 2018 to January 2019 and at Palazzo Ducale in Venice from February to June 2019. The exhibition explores the creative vitality of Venetian artists in the 18th century.

Edward Burne-Jones’ portrait of Ignacy Jan Padereski has an intriguing backstory. Paderewski was a pianist, composer and statesman who became Prime Minister and Minister of Foreign Affairs for the newly independent Poland after World War I. In 1890 he had been spotted in the St John’s Wood area of London by painter Edward Burne-Jones, who was so inspired by this ‘Archangel with a splendid halo of golden hair’ that he returned to his studio and drew him from memory. By coincidence the two were introduced a few days later, when Burne-Jones is said to have greeted the pianist with the words ‘My Archangel!’

Today, Burne-Jones is widely regarded as one of the great British artists and the only Pre-Raphaelite to achieve world-wide recognition in his lifetime. His portrait of Paderewski forms part of the Tate Britain’s first large-scale presentation of his work since 1933. It runs at the Tate Britain’s Linbury Gallery from 17 October 2018 to 24 February 2019.

During the More Music project, the RCM has also loaned instruments and manuscripts to the Paston Treasure exhibition in Norwich and taken part in the V&A’s seminal exhibition, Opera: Passion, Power and Politics. More information about Magnificent Venice can be found here and details about the Tate’s Edward Burne-Jones exhibition are here. Find out more about the RCM Museum here.