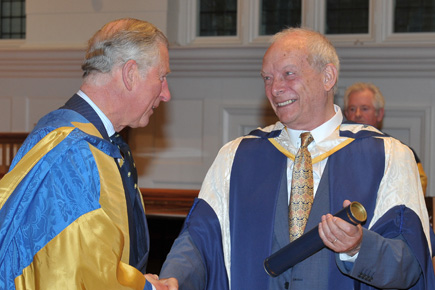 We are very sorry to report the death of conductor, composer and musicologist Christopher Hogwood CBE on 24 September.

Christopher Hogwood worked with most leading symphony orchestras and opera houses in the world. Described as “the von Karajan of early music”, he was universally acknowledged as one of the most influential exponents of the historically informed early-music movement and was the first to record a complete cycle of Mozart symphonies on period instruments. He was equally passionate about music of the 19th and 20th centuries, with a particular focus on the Early Romantics - and on the neo-classical school such as Martinů, Stravinsky, Britten and Copland. He applied the same rigour and supreme musicianship to all his work, striving to discover and recreate the composer’s intentions both in notation and performance.

In addition to founding the Academy of Ancient Music in 1973, he was also a founder member of the Early Music Consort; keyboard player and soloist with the Academy of St Martin in the Fields; Artistic Director of the King’s Lynn Festival; Artistic Director of the Handel and Haydn Society in Boston; a tutor at Harvard University; Principal Guest Conductor of the Kammerorchester Basel; Professor of Music at Gresham College, London; Honorary Professor of Music at the University of Cambridge; and Andrew D.White Professor-at-Large at Cornell University in the USA.

Christopher remained a close supporter of the Royal College of Music, and RCM Director Colin Lawson writes “He was such a brilliant man, and a real inspiration across theory and practice. It was always a pleasure to make music with him in the studio and concert hall.” We were delighted to welcome him in 2012 to conduct the first concert of the RCM Classical Orchestra and to see him awarded an honorary doctorate from HRH The Prince of Wales in 2013.