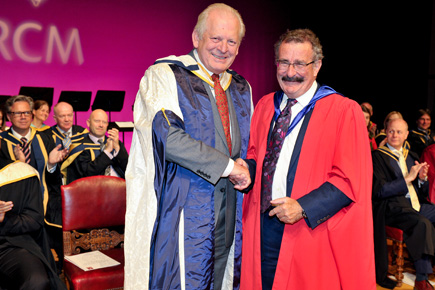 The Royal College of Music is delighted to have awarded alumnus Sir Thomas Allen with an Honorary Doctorate.

The award was conferred by the RCM Chairman, Professor Lord Winston, at the RCM’s annual graduation ceremony in the Britten Theatre on 10 July 2015.

Sir Thomas Allen is an established star of the great opera houses of the world and one of Britain’s most renowned baritones, having performed over 50 roles at the Royal Opera House since he studied at the Royal College of Music in the 1960s.

At the ceremony Professor Colin Lawson, Director of the RCM, stated: ‘During the early years of his career, Gramophone magazine decreed him to be “The best British lyric baritone singing in opera since the war”. As we look back on Sir Thomas Allen’s exceptional career one can only agree that their estimation was entirely correct.’

Upon receiving his award, Sir Thomas gave a speech in which he encouraged today’s graduates to look beyond music during their careers: