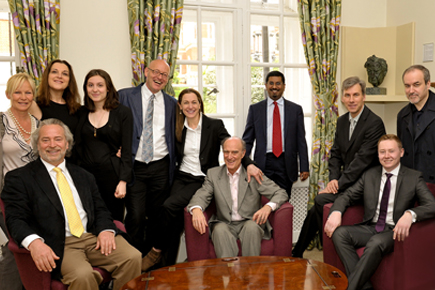 The RCM is delighted to announce that an outstanding young film composer, Mitchell Tanner, is the first recipient of the John Barry Scholarship for Film Composition.

The Scholarship was established by Laurie Barry, the widow of John Barry, in honour of her husband, the five-time Oscar winning composer.

Scholarship funds were raised for the award following John Barry’s Memorial Concert given in the Royal Albert Hall. It allows a young, talented student to develop their musical skills and knowledge by studying for two years on the RCM’s world-famous Composition for Screen Course, where they will be taught by leading composers and experts in the film world.

Mitchell gained a first class honours degree at the University of East Anglia and has been working several jobs, including in a taxi rank, to raise funds to further his studies. Having won a place to study at the RCM, he would have been unable to take up his place without financial support. Mitchell Tanner says:

'I am absolutely overwhelmed to even be considered for this opportunity. I grew up listening to the masterful scores of John Barry, and he has been a hero of mine ever since I was a child. It is a real honour to receive this Scholarship in the name of such an immense figure, and I’d like to thank Laurie Barry for the chance to prove myself worthy of representing John Barry’s reputation and legacy. This will make such a difference to my life, and with the support of this scholarship and John Barry’s family, it will bring me one step closer to achieving my dream of a career composing music for film.'

Representing the RCM were Artistic Director Stephen Johns, Head of Composition William Mival and Area Leader in Composition for Screen Vasco Hexel. Laurie Barry also presented Mitchell with a letter of support from legendary music producer George Martin, who was unable to attend the reception but sent his best wishes.

For more information on donating to the Scholarship contact Development Manager Fiona Rose on 020 7591 4320, fiona.rose@rcm.ac.uk