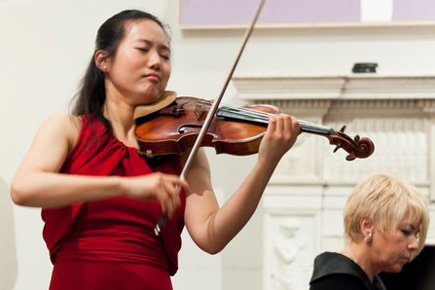 Joo Yeon Sir currently studies with Felix Andrievsky on the RCM’s Artist Diploma programme as Constant & Kit Lambert Junior Fellow 2014-2015. She has twice won the RCM's Concerto Competition and was awarded the RCM President’s Award by HRH The Prince of Wales in May 2014.

The outstanding violinist performed music by Dimitry Kabalevsky and George Gershwin in the competition's final round, held at The Arts Club in central London in association with Classic FM. As well as her £4,000 prize, she will now record a piece of her choice and a short work composed especially by Karl Jenkins, both of which will be broadcast on Classic FM.

Joo Yeon was not the only RCM string player to do well in the competition: the other five talented finalists included recent RCM graduate Benjamin Baker (violin) - who received a cash prize of £500 as one of the competition’s two runners up - and RCM alumna Shiry Rashkovsky (viola).

Jenkins commented: ‘The standard of performances from our finalists was incredibly high, and I'm thrilled with the diverse range of applications the Award attracted. Our winner, the violinist Joo Yeon Sir, displayed panache and vitality, and made an emotional connection with both the panel and the wider audience.’

Joo Yeon says:  ‘I am really honoured for this award and feel blessed for the tremendous support I have received for my music making’.

RCM Head of Strings Mark Messenger says: 'Joo Yeon Sir is a consummate performer so it is hardly a surprise that her talents were recognised in this high-profile competition. However, the fact the Ben Baker, an RCM alumnus, picked up a 2nd prize and that RCM students filled three of the six finalists' spots only serves to underline the qualities and credentials of the Royal College of Music's internationally renowned String Faculty.'

Joo Yeon regularly gives performances in and around the RCM, as showcased in this RCM video, and in 2015 she will present the complete cycle of Beethoven’s 10 Sonatas for Violin and Piano with 10 different RCM pianists over four rush-hour recitals.

The Arts Club Karl Jenkins Classical Music Award, open to all instrumentalists aged between 18 and 30, was launched in 2013 by the Arts Club and Global’s Classic FM to provide a prominent platform for nurturing and supporting young musicians, as well as to identify the most exciting young classical talent in Britain.