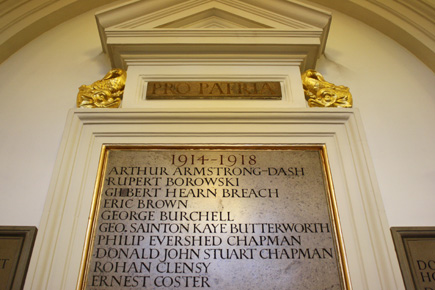 Royal College of Music staff and students have gathered at the RCM’s war memorial to mark Armistice Day 100 years after the outbreak of World War One.

The War Memorial, situated in the RCM’s entrance hall, lists 38 RCM students and staff that lost their lives in the First World War, and 21 who died in the Second. All of their names were read out before the Last Post was played by RCM trumpeter Emily Harding, and two minutes of silence were observed by current staff and students.

WWI soldiers named on the memorial include Eli Hudson - a flautist profiled in this LSO blog post by RCM professor Gareth Davies - and George Butterworth, the famous composer of A Shropshire Lad and The Banks of Green Willow, who was awarded the Military Cross. The full list of names can be read in this report of the first anniversary of the Armistice at the RCM, as printed in the winter 1919 edition of the RCM’s magazine.

More information about the stories behind the names on our War Memorial and the RCM’s contribution to the First World War can be heard in this recent BBC Radio 3 interview with RCM Librarian Peter Linnitt, and seen in the RCM Museum of Music’s current exhibition ‘The RCM and WWI’.

As part of Remembrance Week, on Friday 14 November the RCM Chamber Choir presents a concert including music written during the two World Wars. Go to our events page to find out more.