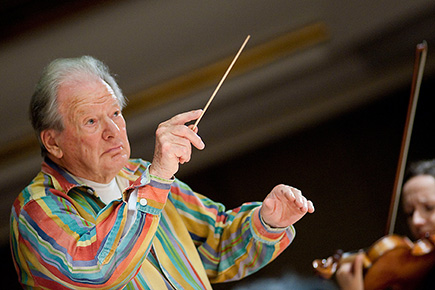 We are deeply saddened by the death of Royal College of Music alumnus and former professor Sir Neville Marriner on 2 October.

Sir Neville began studying violin at the RCM in 1939, interrupting his studies from 1941-1943 to serve in Army reconnaissance. Following an injury and five months in hospital, he returned to the College soon after to complete his training under professor Billy Reed. He embarked on a successful career as both a chamber musician and orchestral violinist and was appointed principal second violin of the London Symphony Orchestra in 1954. During the 1950s, Sir Neville maintained his links with the RCM, returning as a professor to pass on his talent and knowledge to the next generational of violinists.

In 1958 Sir Neville established the now legendary Academy of St Martin in the Fields -  a top class chamber ensemble comprised of London’s finest musicians, including many fellow RCM alumni. Initially conceived as an unconducted chamber orchestra, Sir Neville first led the ASMF from the violin, before gravitating towards the conductor’s baton.

In 1969 Sir Neville left the LSO to pursue conducting full time, supplementing his work with the ASMF with positions at the Los Angeles Chamber Orchestra, the Minneapolis Symphony Orchestra, the Südwest Deutsche Radio Orchestra in Stuttgart and the Northern Sinfonia, and appeared with many of the world’s leading orchestras across the globe, in Vienna, Berlin, Paris, Milan, Athens, New York, Boston, San Francisco and Tokyo.

Sir Neville remained Music Director of the ASMF until 2011, when he stepped down and became Life President of the orchestra.

Professor Colin Lawson CBE, Director of the RCM, said: ‘I am saddened to learn of Sir Neville Marriner’s passing. He was one of the RCM’s most distinguished and successful alumni, whose entrepreneurship and musical achievements made an immense contribution to cultural life in this country and beyond.’

For his services to music, Sir Neville Marriner was appointed CBE in 1979, knighted in 1985 and made Companion of Honour in 2015.