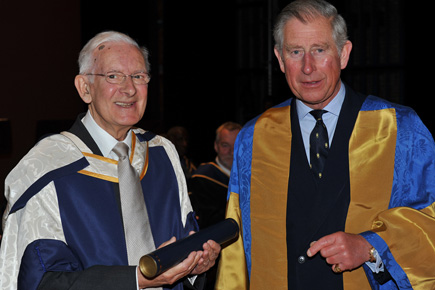 We are very sorry to report the death of Vice-President and former RCM Director, Michael Gough Matthews, on Thursday 11 April 2013.

Michael Gough Matthews’ long association with the Royal College of Music began when he was eight, with a Junior Exhibition award from Sir Percy Buck to study piano. Advised by the RCM against evacuation during World War II, as that would have affected his studies, he travelled to the RCM throughout the Blitz from his parents’ home in Essex. At 15, he won an Open Major Scholarship to study with Frank Merrick, returning after National Service to win the Hopkinson Gold Medal in his final year.

Private studies followed with Harold Craxton who prepared him for the 5th Chopin International Competition, where he won a Chopin Fellowship for advanced studies and a series of recitals throughout Eastern Europe. He later won an Italian Government Scholarship to Rome, and gave his Wigmore Hall debut recital in 1960.

In 1964 he set up a Junior School for gifted children at the Royal Scottish Academy of Music in Glasgow and was later appointed Director of the Junior Department at the RCM. Following Sir David Willcocks’ appointment as RCM Director in 1974, Michael successively held the posts of Registrar, Director of Studies, and Vice-Director before becoming Director in 1984.

He always endeavoured to promote the RCM overseas and succeeded in repositioning the College internationally. When recruiting students for the RCM he gave many masterclasses in Japan, Korea and Hong Kong. In 1985 Michael was invited by the Sultan of Oman to establish the Royal Oman Symphony Orchestra and the following year embarked, with the late Belle Shenkman, on organising RCM concerts at more than 40 Embassies and High Commissions worldwide, sponsored by Jaguar Cars. On his retirement in 1993, Michael was appointed a Vice-President of the RCM. He continued to teach and adjudicate and sat on a number of musical charities well into his retirement.

Michael Gough Matthews was loved and respected by students and staff alike for his kindness and generosity of spirit. His legacy is still much in evidence today.

He was awarded the HonDMus by HRH The Prince of Wales in May 2010.

His funeral service will take place on Saturday 27th April at 12 noon at the West London Crematorium, Kensal Rise. All friends and former colleagues are warmly invited.