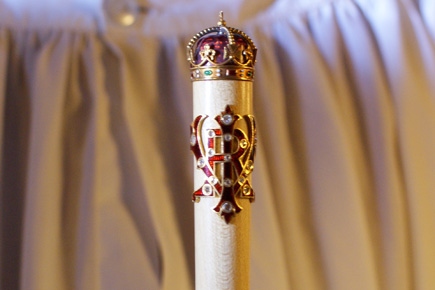 In this four-part series, historian David Starkey explores how the story of British music has been shaped by the monarchy. The final episode focuses on the 19th and 20th century - when the crown rediscovered the power of pageantry - and on the period’s revival of British music, in which the RCM played a crucial role.

Several scenes of the episode were filmed at the RCM, beginning with the story of the institution’s foundation in 1882 by the then Prince of Wales (later Edward VII), and continuing with an insight into the music of former RCM Director Sir Hubert Parry. In the very appropriate location of the RCM Parry Rooms, Professor Jeremy Dibble (Durham University) and Dr Starkey examine Parry’s celebrated work I Was Glad with the assistance of the composer’s autographed score from the RCM Special Collections.

Another rarely-seen item from the RCM Special Collections also features in the programme: a baton (pictured) presented in 1899 by Queen Victoria to the highly respected organist and choral director Sir Walter Parratt, Master of the Queen’s Music. Parratt became the RCM’s senior organ professor when the institution opened, and his pupils here included Herbert Howells, John Ireland, Arthur Somervell and Ralph Vaughan Williams. The baton was given to the RCM in 1961 by Sir George Tomlinson, a close friend of Dorothy Parratt, Sir Walter’s widow.

This episode also features recent RCM alumna Susanna Hurrell as soprano soloist in a performance of Parry's Jerusalem with The Choir of Merton College, Oxford.

Music and Monarchy: Reinventions is available to watch on BBC iPlayer until Saturday 17 August.