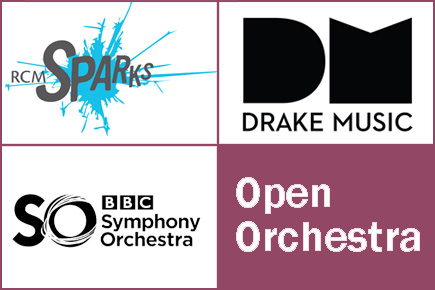 The RCM, BBC Symphony Orchestra and Drake Music (pioneers of assistive music technology) have teamed up with three London boroughs to develop the Open Orchestra project, a new schools music programme bringing together children from special and mainstream schools.

In collaboration with the tri-borough music hub of Hammersmith & Fulham, Kensington & Chelsea and Westminster, the seven-month initiative works with two schools from each borough, one mainstream primary and one special primary school, to give children ‘an exciting introduction to the orchestral world and the opportunity to create new musical material’. The scheme was offered to schools in the hub as free to take part but the number of schools which could take part was limited.

Students will be working on the theme of ‘flight’ and using creative music technology to assist the composition process in workshops led by Drake Music associate musicians, BBC Symphony Orchestra musicians and RCM students throughout the 2012/13 academic year. The project will culminate in a performance of the new work as well as other orchestral repertoire given by the BBC Symphony Orchestra at a schools concert on 22 May.

Carien Mejer, chief executive of Drake Music, says organisers are hoping the project will have long-term effects, including building the skills and confidence of school staff: “We aim to inspire both the children and staff, enabling them to fulfil their creative potential and creating a firm foundation on which the teachers can build after the project has finished.”

Jean Carter, service manager of the tri-borough hub, said that the “enthusiasm of all concerned” would ensure that children in music hub schools “receive exciting musical opportunities led by outstanding professionals who will support children to explore music in the most creative of environments.”

The Open Orchestra project is just one of many initiatives in 2013 being led by RCM Sparks, the RCM’s ground-breaking learning and participation programme.