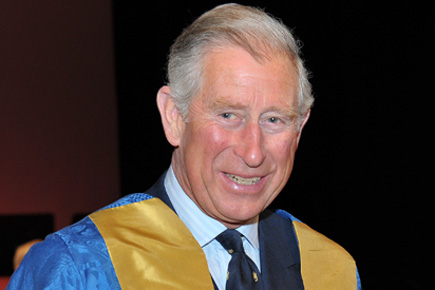 HRH The Prince of Wales celebrated 20 years as President of the Royal College of Music by endorsing a brand-new honour, The President’s Award, which he presented in person at the RCM’s annual awards ceremony on Wednesday 15 May 2013.

During the event, which included live performances from some of the winners, HRH also presented honours to outstanding figures in international musical life, including tenor Alfie Boe and conductor Christopher Hogwood CBE, and to individuals who have made exceptional contributions to music and to the Royal College of Music.

The new President’s Award honours a student for outstanding work in the community and was presented to young Irish percussionist Ruairi Glasheen, now completing a Masters at the RCM, who has been mentoring children from schools where high numbers are eligible for free school meals as part of the RCM’s Sparks Juniors programme.

The Prince of Wales endorsed this Award and commissioned wood carver Tim Plunkett, who is based in Norfolk, to carve a rose bowl from a piece of oak from His Royal Highness’s Duchy of Cornwall Estate. He presented the Award for the first time during the event, before hearing Ruairi and children from the RCM’s ground-breaking ‘Sparks Juniors’ programme in a special performance and meeting them afterwards.

Honorary Membership of the Royal College of Music (HonRCM) was presented to six individuals who have made an outstanding contribution to music and to the RCM: philanthropist Graham Bamford, composer and educator Rachel Leach, RCM Director of Finance Marcus McDonald, RCM Director of Development Samir Savant, philanthropist Dasha Shenkman and Philharmonia Orchestra chief David Whelton.

Leading British conductor Christopher Hogwood, universally regarded as one of the world's leading exponents of historically-informed performance, was presented with an Honorary Doctorate.

After the ceremony, His Royal Highness attended a short concert in which the Tagore medallists and the Rosebowl winner performed works by Ravel, Hertel and Rachmaninov, and then met RCM students and supporters.

View a gallery of photos from the day.

To mark 20 years of HRH The Prince of Wales’s Presidency of the RCM, we have been sharing some photos from His Royal Highness's previous visits to the RCM. You can view the photos on our Facebook page.