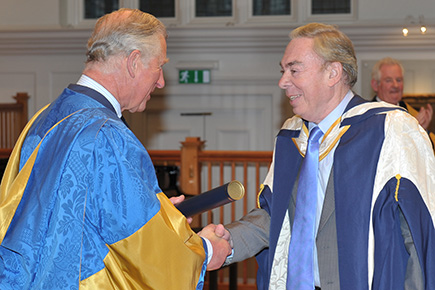 HRH The Prince of Wales honoured a number of outstanding figures in international musical life on Wednesday 14 May at the RCM’s Annual Awards ceremony.

Andrew Lloyd Webber, who received an Honorary Doctorate said:  “I am overwhelmed to receive this award from the Royal College of Music, an historic British institution with close links to my family.” Nicola Benedetti said: “I am thrilled to receive a Fellowship from the Royal College of Music, where so many highly esteemed and talented musicians have studied. It’s a real privilege to be recognised in this way.”

His Royal Highness also presented awards to three of the RCM’s most exceptional recent graduates; violinist Ben Baker – who received the Queen Elizabeth The Queen Mother Rosebowl – and soprano Louise Alder and pianist Poom Prommachart, who were both awarded the Tagore Gold Medal. They all also performed at the ceremony.

The President’s Award was instituted in 2013 by HRH The Prince of Wales in celebration of his 20th year as President of the RCM, to honour a student for outstanding work in the community. This year it was presented to violinist Joo Yeon Sir who has passionately shared her musical gift with residents at St Wilfrid’s Care Home and others across the capital. A video about her work is available to watch on the RCM YouTube channel.

Colin Lawson, Director of the RCM, said: "I am delighted that the Royal College of Music continues to honour such illustrious and diverse musicians with our annual awards. HRH The Prince of Wales continues to be a wonderful advocate for the Royal College of Music and the musical lives that we so carefully nurture. It is very special to be able to honour the most extraordinary and established musical figures alongside a new generation of ferociously talented RCM graduates."