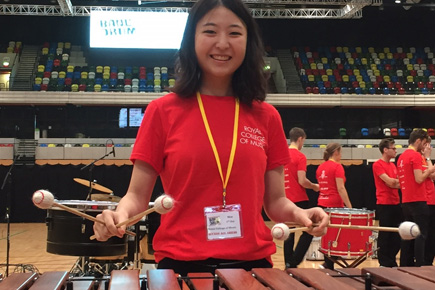 RCM percussionists have been showcased in a number of recent events and radio features.

On Monday 3 October members of our percussion faculty performed at Inspire Works’ Bang the Drum 2016 – an event at the Queen Elizabeth Olympic Park held in support of UK charity Street Child United. A new Guinness World Record for the world’s largest drumming lesson was set by the 1,827 school children and teachers taking part in the event, which was streamed live and is available to watch again on YouTube.

RCM percussionist Joley Cragg has been announced as the recipient of this year’s Bell Percussion award, generously provided for an RCM student each year by Bell Percussion. She was also recently featured on BBC Radio 3 as part of the Workers Union Ensemble performing Collide by Radio 3’s current Embedded Composer in 3 Matthew Kaners. Joley said ‘Matthew writes very sensitively for percussion, making it an integral part of the ensemble as opposed to just sound effects.’

The RCM’s ‘Redhocks’ American drumline were also special guests at a recent concert at Dorking Halls, The Big Bang. External performances such as this are part of an extensive and varied range of performance opportunities offered to RCM percussion students, which also include an annual festival, termly percussion showcases and regular faculty performance classes.