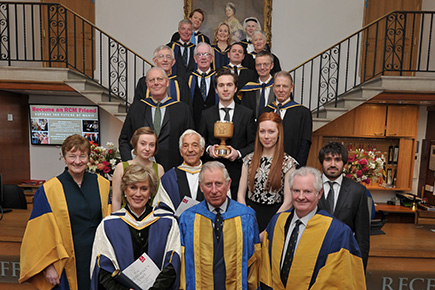 HRH The Prince of Wales honoured a number of outstanding figures in international musical life today at the Royal College of Music's Annual Awards ceremony.

These included renowned conductor and pianist Vladimir Ashkenazy and acclaimed lyric soprano Dame Kiri Te Kanawa, who both received their Honorary Doctorate from HRH The Prince of Wales.

Vladimir Ashkenazy said: "It is a tremendous honour on this truly special and memorable occasion to be awarded the degree of Honorary Doctor of Music of the Royal College of Music".

His Royal Highness also presented awards to the RCM’s most exceptional recent graduates: violinist Agata Daraskaite – who received the Queen Elizabeth The Queen Mother Rosebowl – and saxophonist Amy Green and double bassist Rodrigo Moro Martin, who were both awarded the Tagore Gold Medal. They all also performed at the ceremony.

The President’s Award, which was instituted in 2013, by HRH The Prince of Wales was this year presented to composer Arne Gieshoff. His works have been performed, amongst others, by the BBC Scottish Symphony Orchestra, Philharmonia Orchestra, London Philharmonic Orchestra and Royal Scottish National Orchestra and have been broadcast on BBC Radio 3.