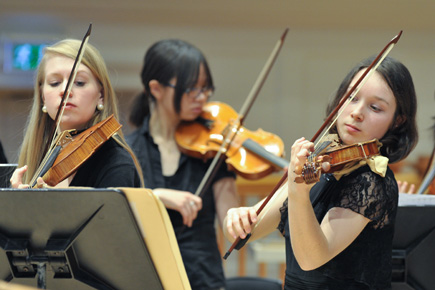 Twelve outstanding members of the RCM Baroque Orchestra gave two sell-out performances of the famous work at the University of Salzburg and at the historic Church of St Peter and St Paul in Weimar, where Bach himself was an organist.

The tour was part of an on-going collaboration with the Salzburg Mozarteum and Bach Gesellschaft Choir – ensembles which also joined RCM musicians for the opening concert of our Bach Festival Week in March 2015.

RCM Chair of Historical Performance Professor Ashley Solomon and Performance Venue and Stage Manager Bex Gibson accompanied the performers on the trip, and the performances were led by Italian conductor Vittorio Ghielmi – one of the world’s top viola da gamba players who regularly appears in the RCM Festival of Viols.

Harpsichordist Nathaniel Mander, a current RCM Junior Fellow, says of the trip: “Easily one of the highlights of my year; this collaboration project with the Mozarteum was musically nourishing and socially satisfying on every level. It was a privilege and pleasure to be a part of this profound musical journey.”

Violinist Magdalena Loth-Hill said: "Having the opportunity to work and spend time in such culturally rich places was so inspiring. It's not every day that you get to perform in the church where three of Bach's children were baptised!"

The RCM’s Historical Performance department regularly offers students the opportunity to perform abroad and exchange ideas with their peers in different countries, with recent tours taking our musicians to major Italian cities in 2013 and 2012.

Photos and tweets about the recent trip to Salzburg and Weimar can be viewed using the hashtag #RCMontour, and Salzburg Mozarteum’s short film about the project, which includes interviews from Ashley Solomon (03:08) and Vittorio Ghielmi (01:45), can be watched below: