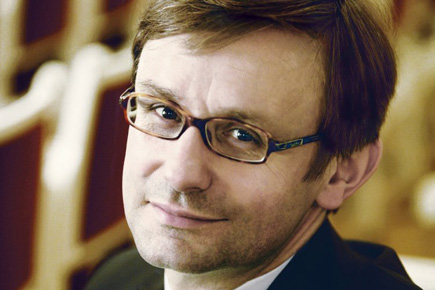 RCM alumnus Simon Halsey has been awarded The Queen's Medal for Music 2014.

The prize is awarded to an outstanding individual or group of musicians who have had a major influence on the musical life of the nation. Simon was presented with the award by The Queen at a reception at Buckingham Palace on Wednesday 11 March, following a performance by the London Symphony Orchestra.

Simon Halsey studied conducting at the Royal College of Music, and has since made a name for himself as a renowned conductor of choral repertoire and an ambassador for choral singing across the world. He has been Chorus Director of the City of Birmingham Symphony Orchestra Choruses for over 30 years, and in 2012, was appointed Choral Director of the London Symphony Orchestra and London Symphony Chorus.

Simon is the tenth recipient of the award and follows in the footsteps of fellow RCM alumnus Sir Thomas Allen, who was awarded the medal last year.

Simon Halsey said: “I am so surprised and thrilled to receive this extraordinary honour from Her Majesty the Queen. Choral music is a vital part of our national life and is such a force for social and educational good. I’d like to see this medal as recognition of the work of a whole generation of dedicated choral musicians.”

Commenting on the award, Master of The Queen's Music Judith Weir said: "Choral conductor Simon Halsey has made a fundamental contribution to European music through his championship of choral singing as a vital part of orchestral performance, a British tradition which stretches back several centuries. … His lively, participatory style has inspired a new generation of young choral directors, together with a remarkable upsurge of interest in choirs and singing in the UK".