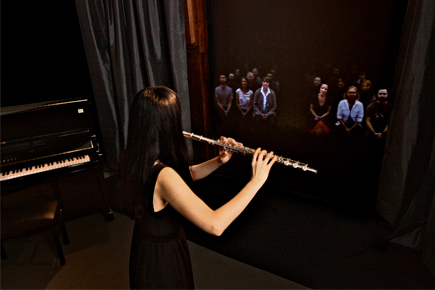 A pop-up version of the Royal College of Music's ground-breaking performance simulator has featured at Imperial College London's annual May Festival.

Developed by the RCM's Centre for Performance Science the simulator, which features an on-stage and back-stage area and a virtual reality audience, helps manage the stress of performing in front of large groups of people by recreating the conditions of a concert hall or audition room. The benefits of the simulator reach beyond the concert hall, with future plans to use the technology to help business executives hone their skills in public speaking as highlighted in recent articles in the Evening Standard and The Independent.

Professor Aaron Williamon, RCM Professor of Performance Science, said: 'Stage fright is a very real problem, not just for musicians but for anyone who is required to perform in front of an audience […] Our work with the simulator shows that musicians who are given repeated exposure to realistic performance situations can more effectively manage the stresses of performing and the demands of their audiences.'

The annual festival at Imperial has grown from a modest pilot project in 2012 to large-scale prominent annual fixture with thousands flocking to South Kensington to enjoy a range of workshops, tours, talks and performances.