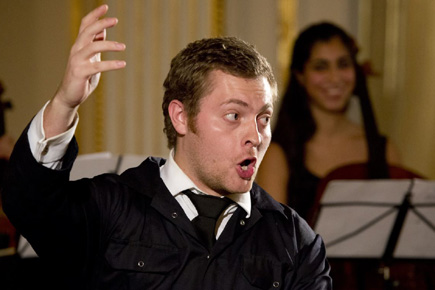 Singing a Song in a Foreign Land

This February the RCM’s Singing a Song in a Foreign Land project comes to a climax with a concert series and three-day symposium.

Led by RCM performer-researcher Norbert Meyn, Singing a Song in a Foreign Land is a major RCM research and performance project on music and emigration, focusing on the emigration of musicians from central Europe as a result of persecution by the Nazis in the 1930s.

Throughout its two-year duration the project’s many events and concerts have informed and entertained audiences, such as the April 2013 performance of Georg Tintner's The Ellipse by RCM soprano Anna Rajah and the Park Quartet which can be viewed on the RCM’s YouTube channel.

The project's upcoming symposium and ‘Émigré Salon’ concert have now sold out, however there is still the opportunity to hear rarely-heard chamber and choral works by Hans Gál, Hanns Eisler, Ernst Toch and Robert Kahn in ‘The Watchman’s Report’ on 22 February.  For this gala concert RCM Artistic Director Stephen Johns and the acclaimed RCM Chamber Choir join forces with leading instrumentalists for performances addressing the composers’ various responses to exile.

The Watchman’s Report takes place in the RCM’s Amaryllis Fleming Concert Hall at 7.30pm on Saturday 22 February. Tickets cost £5 and can be booked via the RCM events website or the RCM Box Office on 020 7491 4314.

Visit www.rcm.ac.uk/singingasong to find out more about Singing a Song in a Foreign Land, which is part of Project ESTHER and supported by the Culture Programme of the European Union.