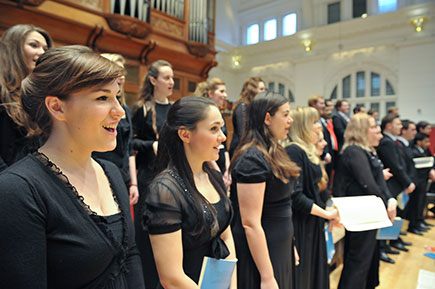 Singing is good for you

Researchers from the Royal College of Music have shown that listening to and performing music has a positive biological effect on mood and stress levels.

The findings follow a study carried out by the RCM’s Centre for Performance Science which included two high-profile public events at Cheltenham’s prestigious Music Festival in July and London’s Union Chapel in March.

At both events, researchers worked with renowned choral conductor and composer Eric Whitacre and a group of singers and audience members to explore the benefits and stresses of choir singing. Both performers and audience members submitted saliva samples, wore ECG monitors and completed a questionnaire, allowing CPS researchers to measure their heart rate and stress-related hormones.

The results indicate that listening to a concert leads to a decrease in stress hormones and negative mood states, while simultaneously increasing positive mood states. Meanwhile, performers experienced reduced levels of stress hormones in a low-stress rehearsal environment, with results also showing that the overall act of singing, whether in rehearsal or performance, had an inherently relaxing effect.

Following the study at Union Chapel Aaron Williamon, Professor of Performance Science said: “This is the first time participation in a cultural event has been shown to have significant psychobiological effects, and the implications are hugely exciting, particularly when taking into account previous research by the Centre for Performance Science which links reduction in stress hormone activity with increases in immune function. This preliminary study provides several new avenues of further investigation of how making and experiencing music can impact on health and wellbeing.”

Since the announcement of these results, the study has received widespread press attention, with coverage in Gramophone, The Guardian, M-Magazine and Classical Source. In his article for The Times, Richard Morrison, having participated in the study at Union Chapel himself, was able to offer a unique and in-depth perspective on the research and results produced.