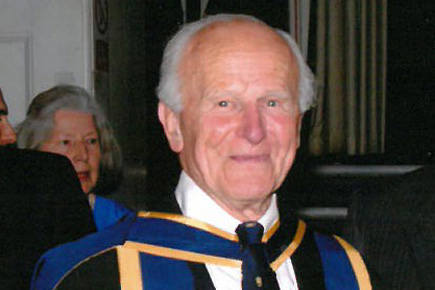 We are deeply saddened to report the death of former RCM Director, Sir David Willcocks, on 17 September.  Described as ‘England’s choirmaster’ by Sue Lawley when he appeared on BBC Radio 4’s Desert Island Discs, Sir David was a much-loved and prominent choral conductor, composer and organist who made an enormous contribution to British cultural life.

Sir David began his musical career training as a scholar at Westminster Abbey from 1929 to 1934 where he was conducted by Edward Elgar, amongst others.  He then went on to be a music scholar at Clifton College, Bristol and from there organ scholar at King’s College, Cambridge.  He interrupted his studies at Cambridge when the Second World War broke out and bravely served in the Duke of Cornwall’s Light Infantry for six years, in which time he won the Military Cross for outstanding service. After completing his studies at Cambridge he became organist of Salisbury Cathedral. He later moved to become organist of Worcester Cathedral from 1950 – 57, during which time he was also principal conductor of the Three Choirs Festival, where he worked closely with Vaughan Williams, who had a profound influence upon him.

After this, he succeeded his mentor, Boris Ord, as Director of Music at King's College, Cambridge, whose choir he took to new fame through making numerous recordings, tours and television broadcasts.  In 1960 he also became the musical director of The Bach Choir in London, a post he held for 38 years.  He also became the editor of Carols for Choirs, the collections which to this day make his name synonymous with British choral music at Christmas.

In July 1972, David Willcocks was invited by the RCM Council to succeed Sir Keith Falkner as Director of the Royal College of Music in April 1974, a post he held for ten years.  During this time he led the College through difficult financial times, during cuts in funding to Higher Education; he led the fight against proposals to cut grants to help ‘vocational’ students, retaining the length of undergraduate study as four years. He was aware that the centenary of the RCM would fall within his directorship, and so he led the Centenary Appeal to develop the West courtyard, starting the programme to build the new opera theatre, named after Benjamin Britten – another RCM alumnus and great friend of Sir David – even if this development did take away the space where he would play cricket with students and colleagues on warm summer days.  On one occasion, he agreed to play the winner of the Students’ Association pool competition, which took place one lunchtime in the student bar.  Unfortunately, this was also the moment when government inspectors arrived – unannounced – and found him holding a pint in the bar surrounded by cheering students.

In spite of the administrative workload, Sir David always sustained a direct involvement in the music making of the College.  For Sir David, it was always of paramount importance that he should convey his love of music to others.  He was an inspirational figure to students and staff alike, who held him in great respect.  In his termly College addresses, he regularly spoke of the need for young musicians to develop a sound technique through regular and methodical practice, but also, in order for them to become a ‘complete musician’, to have an understanding of style and the ability, as a performer, to communicate truly with an audience.   Above all, music for him was something to be shared, and it is this collegiate approach to music making, along with his humility, gentleness and generosity of spirit, for which he shall be fondly remembered.

He was appointed CBE in 1971, created a Knight Bachelor in 1977 and awarded a Fellowship of the  RCM in 1971.  In addition, he held over fifty honorary degrees.

Sir David Willcocks was Director of the Royal College of Music for 10 years until 1984 and presided over a golden period in the RCM’s history. The College benefited enormously from the leadership of a musician of such talent and flair. His influence is still keenly felt within the RCM and we are deeply saddened at the news of his passing.