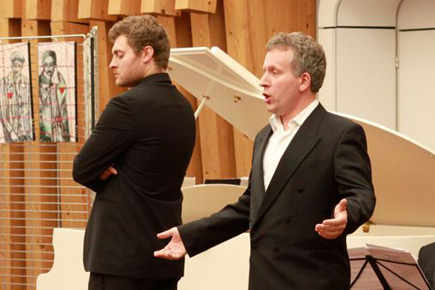 Singing a Song in Strasbourg

On 9 November, RCM singers and instrumentalists headed to Strasbourg to recreate a unique event.

Hans Gal’s darkly comic wartime revue What a Life! – written while he and was cruelly interned on the Isle of Man during World War II – was first brought to life by the RCM in 2012, when RCM professor Norbert Meyn led semi-staged performances in London and Germany.

These concerts were such a success that the RCM was invited to present the work once again in the highly appropriate venue of the Council of Europe, seat of the European Court of Human Rights.

This latest performance – which formed part of a colloquium seeking to preserve the memory of the holocaust and to prevent future crimes against humanity – was once again rapturously received.

You can find out more about What a Life! on the RCM website.

All three performances formed part of the two-year research project Singing a Song in a Foreign Land, an on-going exploration of music written by émigré composers. For more information, visit the RCM’s Singing a Song website.