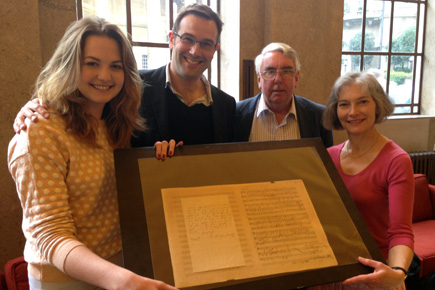 RCM mezzo-soprano Amy Williamson and professor Christopher Glynn have given the first performance of a lost song by Felix Mendelssohn on BBC Radio 4’s ‘Today’ programme.

It is the first public hearing of the song - entitled Das Menschen Herz ist ein Schacht or The heart of man is like a mine - since it went missing 140 years ago, having been recently re-discovered in a private collection in America.

The existence of the song was known to scholars at it had been sold at auction in 1862 and again in 1872 but it was never published, and there whereabouts of the manuscript has since been something of a musical mystery. It is not known how it came to be in America.

The song is accompanied by an autograph letter by Mendelssohn to the man who commissioned the song, theatre manager Johann Teichmann, dated 3 May 1842. The manuscript has the composer's customary signature at the bottom.

Thomas Venning, senior specialist in manuscripts from Christie’s, said: “This is a very exciting re-discovery: the song was only ever a private commission and we know that even in Mendelssohn’s lifetime he deliberately prevented its circulation. The manuscript has been lost for 140 years, so it seems likely that we have here music by one of the great composers that no living person has ever heard.”

Amy and Christopher’s performance is available to listen to on BBC iPlayer (from 2:45:39) and the full news article can be found on the BBC’s website.