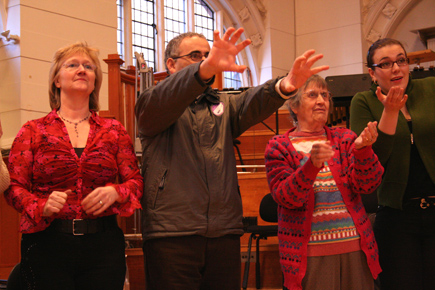 After four successful years at the RCM, in 2011 the acclaimed project Turtle Song began its nationwide roll-out, starting in Cambridge.

Over the course of three months, animateur Anna Jewitt, composer and RCM alumnus Russell Hepplewhite joined forces with a team of musicians from the RCM and Clare College. Each week, they helped project participants to create their own song cycle, Songs of the Sea. The project culminated in a fantastic performance of this entirely original 30-minute work on Friday 2 December in the West Road Concert Hall, Cambridge.

Turtle Song is a singing and song-writing initiative for people with memory problems and all forms of dementia and their carers. It gathers professional musicians, workshop leaders and music students to deliver a high quality, challenging and enjoyable experience.

Among others, this project has received support from RCM alumnus Graham Ross, who became Director of Music at Clare College Cambridge at the age of just 24.

Turtle Song is a partnership project with Turtle Key Arts, English Touring Opera and RCM Sparks. This project was funded by the Henry Smith Foundation.